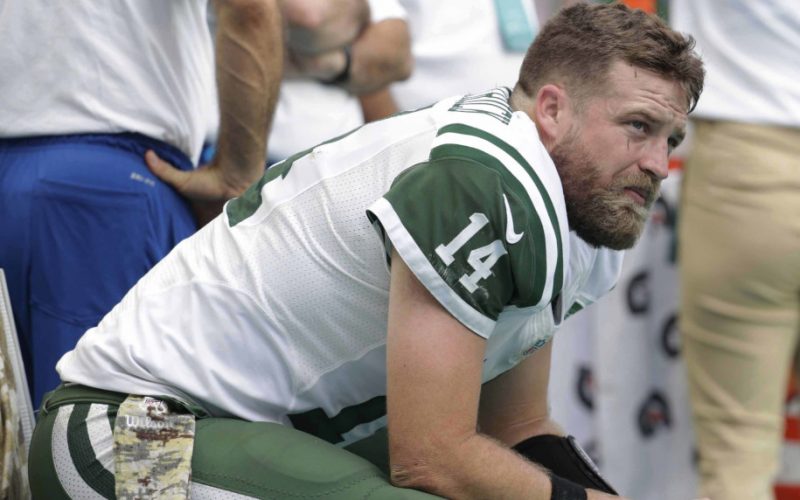 MIAMI GARDENS, Fla. — This one is going to sting the Jets for a while.

The Dolphins handed the Jets a 27-23 loss at Hard Rock Stadium on Sunday in a wacky game that featured huge second-half momentum swings.

It was decided by a 96-yard kickoff return for a touchdown by Dolphins rookie running back Kenyan Drake with 5:15 left in the game. The kickoff was the Jets’ second try after safety Antonio Allen jumped offsides on the first attempt, a play in which the Jets stopped returner Jakeem Grant on the 19-yard line.

The loss snaps a two-game winning streak for the Jets and drops them to 3-6 and into last place in the AFC East, effectively ending any hope for them to make the playoffs. The Dolphins are now 4-4.

Ryan Fitzpatrick, who threw two interceptions and left the game briefly with a left knee injury, put the Jets ahead for the first time since the first quarter with 5:42 left in the game, when he found rookie Jalin Marshall for an 18-yard touchdown. The Jets got the ball on the 18 after Dolphins punter Matt Darr dropped a snap, picked the ball up and was stopped for a turnover on downs.

But the 23-20 lead was short-lived thanks to the kickoff return.

Fitzpatrick exited the game for a series at the end of the third quarter after injuring his left knee on an illegal hit by Jordan Phillips. Bryce Petty replaced Fitzpatrick and completed both passes he threw for a total of 19 yards, setting up a field goal.

Fitzpatrick put a brace on the knee and came back in the game on the next series. He led the Jets down the field, connecting on a 25-yard pass with Quincy Enunwa and a 27-yard pass with Robby Anderson. The pass to Anderson originally was ruled a 40-yard touchdown, but upon review Anderson was ruled down at the 13. The Jets could only wish it counted because three plays later, Fitzpatrick threw his second interception of the game.

Bobby McCain picked off Fitzpatrick in the back of the end zone. It was a strange play because there was no Jets receiver near the ball. Either Fitzpatrick was trying to throw it away or he thought Anderson was running a different route. It was Fitzpatrick’s 12th interception of the season and his fifth in the red zone.

On the series before Fitzpatrick was injured by Phillips, the 335-pound defensive tackle intercepted a Fitzpatrick pass intended for Austin Seferian-Jenkins. Phillips dropped into coverage and Fitzpatrick never saw him. The Dolphins converted the turnover into an Andrew Franks 29-yard field goal that gave them a 20-13 lead.

The teams played an ugly first half with 10 penalties between them and very little defense. Miami led the Jets 14-13 at halftime on a touchdown pass from Ryan Tannehill and a 20-yard touchdown run by Jay Ajayi (111 yards, who did not rush for 200 yards for the third straight week. Matt Forte scored on a 31-yard run and the Jets got two Nick Folk field goals in the first half.

Previous PostDerrick Rose Must Take On Leadership Role for Knicks

Next PostGiants Hold On for 28-23 Win Over Eagles