Giants might want to reduce JPP and Olivier Vernon’s workloads 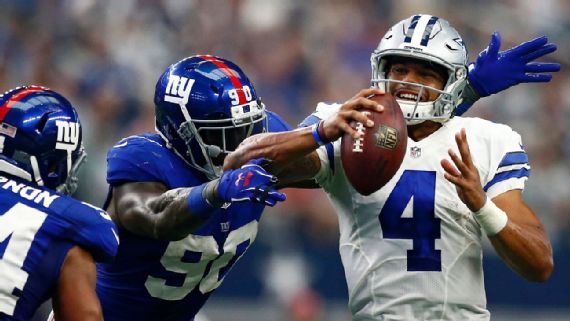 Defensive end Jason Pierre-Paul has played 196 out of 202 (97 percent) of the defensive snaps this season despite a banged-up shoulder. Olivier Vernon has been on the field for 188 snaps (93 percent) despite a problematic wrist. They’ve barely come off the field during the Giants’ first three games of the season.

Defensive tackles Damon Harrison and Johnathan Hankins have also shouldered heavy workloads. Hankins has played 75 percent of the defensive snaps, a massive number for a 320-pound interior lineman. And Harrison has played 60 percent.

It’s an approach defensive coordinator Steve Spagnuolo knows needs to be altered if those players are going to last and the Giants (2-1) are going to finish games strongly.

“Yeah, we need to take a few snaps off of those guys. Especially with the injuries they’re kind of dealing with,” Spagnuolo said. “It’s a good point and it’s hard to take those guys out — and they don’t really want to be out. None of those guys do. But I think you make a really good point because when you get down to the end, we really need to step up and those guys need to be fresh. And we’ve talked about that because we’ve looked at the snaps that Kerry Wynn and Owa Odighizuwa and Romeo Okwara had and they probably didn’t have enough.”

Odighizuwa and Okwara are taking some snaps on the interior in pass-rushing situations, but they’ve rarely been used at defensive end. Wynn has been used sparingly this season.

The Giants are leaning on their starters on the defensive line perhaps more than any team in the NFL. The Minnesota Vikings, whom they face on the road Monday night, lead the league with 15 sacks. But they don’t have a defensive lineman playing more than 85 percent of their snaps.

Even Denver Broncos star Von Miller gets his fair share of rest. He’s played 75 percent of their defensive snaps and leads the NFL with five sacks. Griffen is tied for second with four.