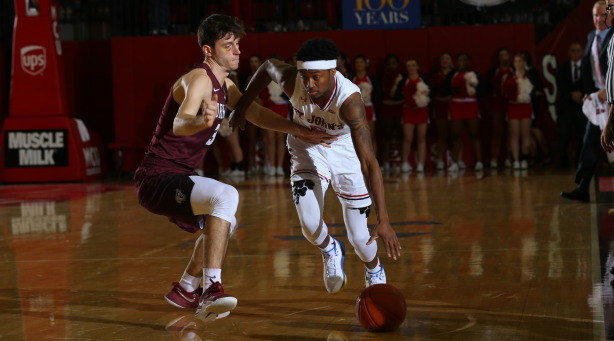 QUEENS, N.Y. – The St. John’s men’s basketball team enjoyed one of its most complete and efficient efforts in recent memory on Thursday night, defeating local rival Fordham by a 90-62 margin in front of 4,474 fans at Carnesecca Arena.

As a team, the Red Storm (5-5) sank 32 of its 55 shot attempts from the floor, including an 18-of-27 effort in the second half, to finish the contest at a 58.2 percent clip, the squad’s second-best output of the season in that regard. From beyond the arc, the Johnnies converted on 15 of their 31 attempts, just one 3-pointer away from tying the single-game school record for made triples. Thursday marked the fourth-straight game and the seventh time in 10 outings this season that the Red Storm has made 10 or more 3-pointers.

The Johnnies assisted on 24 of their 32 made baskets, their highest total in a single game since the team dished out 29 assists on December 7, 2013 at Madison Square Garden, also against Fordham (5-5).

With the win, the Johnnies increased their all-time lead in the series history to 66-22. The Red Storm has won 26 of the last 29 meetings between the two teams and the Rams have not won consecutive contests in the series since 1939.

Playing his second-straight contest without the team’s leading scorer and backcourt mate Marcus LoVett, Shamorie Ponds once again stepped to the occasion and proved why he is one of the league’s most highly-touted young talents. The freshman from Brooklyn had the best outing of his nascent career, netting 26 points on 9-of-13 shooting, including a 7-of-11 effort from beyond the arc, while dishing out nine assists, grabbing seven rebounds and recording four steals. Ponds’ seven triples tied for the second-most in school history, just one off Avery Patterson’s school-record eight made threes against North Florida on Nov. 10, 2006. Ponds became one of just six players in St. John’s history to ever knock down seven in a game, joining Patterson, D.J. Kennedy, Anthony Mason Jr., Daryll Hill and Bootsy Thornton.

The Red Storm had two players record 20 or more points apiece for the third time this season, as Federico Mussini drained seven of his nine shots from the floor, including four of his six tries from deep, to finish with 20 points. The sophomore from Reggio Emilia, Italy, also grabbed five rebounds and dished out three assists.

The Red Storm found it hard to miss in the early going, sinking five of its first eight tries from three-point territory and jumping out to a 25-14 lead with 10:22 to play in the first half.

With its advantage in the crosshairs, St. John’s netted the final eight points of the half, as Ahmed threw down a dunk, Ponds nailed a three-ball and Mussini went the length of the floor to complete an old-fashioned three-point play as time expired and give the Johnnies a 42-33 halftime lead.

Fordham trimmed the deficit to 14 with just over 11 minutes remaining in the game, but Mussini acted quickly to kill any thoughts of a comeback, sinking back-to-back triples to give St. John’s its first 20-point lead of the night, 65-45, with 10:06 to go.

St. John’s returns to action on Sunday afternoon, traveling to Barclays Center for a 12 p.m. meeting with the Blackbirds of LIU Brooklyn. The contest, which will be aired on FS1 and 970 AM WNYM, will be the first game coached by Chris Mullin in his home borough. The game is also the first of a doubleheader, which features Hofstra and No. 6/7 Kentucky in the second tilt.