Derrick Rose Must Take On Leadership Role for Knicks 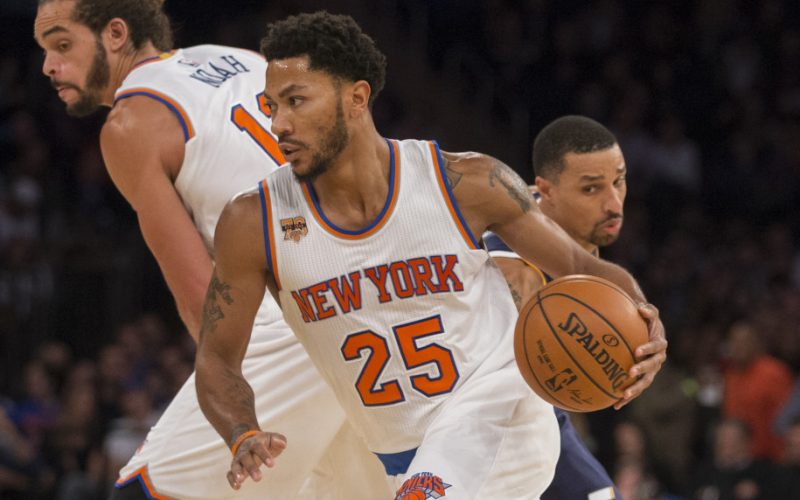 During his brief visit to Chicago, Derrick Rose was hit with questions about not stepping up as a leader last season when things went badly for the Bulls — charges that he was too quiet and into himself.

Rose has not been afraid to be outspoken as a Knick in his inaugural season. He wasn’t shy talking about his innocence and refusal to settle before his civil sexual assault trial and certainly he’s not passive talking about the Knicks’ defensive troubles.

When reporters were let into the locker room after Sunday’s 114-109 meltdown against the Jazz, Joakim Noah was gone. Rose stood, as usual, in the middle of the room, all dressed, skullcap on, waiting to vent.

The forthcoming Rose detailed what ails the Knicks regarding defensive shortcomings — all but diagramming their lack of communication in defending the 1-3 and 1-4 pick-and-rolls. For the casual basketball fan, that’s the pick-and-roll involving the point guard — Rose — and either the small forward Carmelo Anthony (3) or power forward Kristaps Porzingis (4).

“There was miscommunication,” Rose said. “That was the first time we got a steady diet of it. We have to be more detailed. We didn’t execute the game plan. We didn’t adjust the right way.”

Rose was visibly ticked off at another defeat and a 2-4 record that took the shine from the Knicks’ victory in Chicago. He knows he got outplayed Sunday by Jazz point guard George Hill, who, like Rose, will be a free agent this summer and is aging like fine wine. Hill finished with 23 points, nine assists, no turnovers and two steals.

Rose is now finding his groove as a passer, notching 18 points and eight assists, but had four turnovers. However, as he faced the music, he kept repeating the Knicks’ poor record is all about defense. Noah didn’t share his thoughts after the 2014 Defensive Player of the Year posted a four-point, two-turnover stinker, failing to build on his electric game in Chicago on Friday. Even as a native New Yorker, he seems surprised by the negativity toward the Knicks.

“In New York City when you lose a couple games, you definitely feel it,’’ Noah said in Chicago. “When you win, it’s the best. But when you lose, they’re on you.”

In the fourth quarter, Noah showed his confidence on offense isn’t quite there yet. He drove down the lane, looking to have a clear path. Instead he tried a kick-out that was intercepted. Rodney Hood drained a 3-pointer for a 96-89 lead with 5:54 left. A dagger.

“It hurts losing,’’ Rose said. “I’m not going to sit here and lie to you. It hurts. It sucks. We got to learn from it. I’m seeing improvement about building the chemistry. But where one guy messes up, we have to give extra effort on that play to stop the ball. It’s all about covering up for each other.’’

Next PostJets Lose on 96 Yard Kick Return by Miami Rookie