Giants Hold On for 28-23 Win Over Eagles 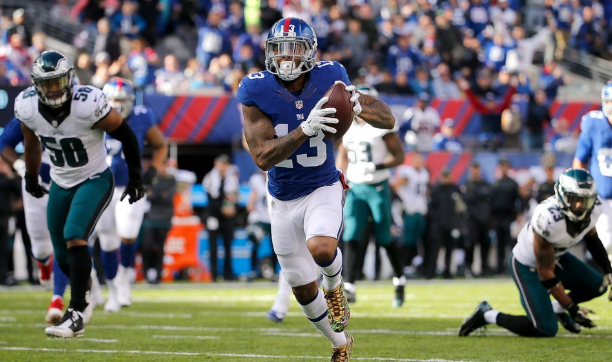 EAST RUTHERFORD — The Giants became the second team to end a curse this week.

While the Chicago Cubs gained slightly more acclaim for ending a 108-year World Series drought, the Giants ended their own curse on Sunday with a 28-23 win over the Eagles in front of 80,309 fans at MetLife Stadium.

It wasn’t easy, as the Giants had to hold on after a late interception by Eli Manning in their own territory. The Eagles got to the Giants’ 17-yard line before Carson Wentz failed to connect with Jordan Matthews in the end zone with Trevin Wade in coverage on fourth down with 1:28 remaining.

The Giants had lost four straight and 13-of-16 to the Eagles entering Sunday. The win moved the Giants (5-3) into sole possession of second place in the NFC East behind the Cowboys (7-1).

Giants coach Ben McAdoo used last week’s bye to address the problems that had plagued his team during the first half of the season.

With the game on the line, McAdoo turned to rookie running back Paul Perkins over veteran Rashad Jennings. Perkins finished with 11 carries for 32 yards, compared to 11 carries for 26 yards for Jennings.

McAdoo benched struggling tight end Larry Donnell, allowing backups Will Tye (four catches for 33 yards) and Jerell Adams (three catches for 24 yards) to step into bigger roles. Even before veteran receiver Victor Cruz left with an ankle injury, he saw his playing time cut in favor of rookie Roger Lewis, who had a 30-yard touchdown catch. McAdoo also used right tackle Marshall Newhouse as an extra blocker on a handful of snaps.

The Giants had a chance to run out the clock, but Manning’s third-and-4 pass to Tye was intercepted by Jordan Hicks after a tip by defensive end Connor Barwin with 1:48 left.

The Eagles marched down for a touchdown on the opening drive of the third quarter to cut the Giants’ lead to 21-17. The Giants answered with a 10-play, 75-yard drive that ended with a 32-yard touchdown pass to Sterling Shepard to reestablish their 10-point cushion.

The Giants took a 21-10 lead into halftime thanks to opportunistic play in all three phases.

Safeties Landon Collins and Andrew Adams had interceptions on the Eagles’ first two possessions. That extended a streak of five straight series with interceptions for the Giants’ defense stretching back to their win over the Rams in Week 7. Collins has three interceptions in his past two games after intercepting just one pass in his first 22 career games.

The offense capitalized on the short fields, with Manning hitting Odell Beckham Jr. for a 26-yard touchdown two plays after Collins’ interception. Manning found Lewis for a 30-yard touchdown after Adams’ interception to give the Giants a 14-0 lead less than six minutes into the game.

The defense also stopped the Eagles twice on fourth down on first half deep in Giants’ territory. And the special teams unit came up with a blocked field goal on a 40-yard attempt late in the second quarter. Jason Pierre-Paul broke through the line for the block and Janoris Jenkins scooped up the loose ball before an ill-advised lateral attempt that was recovered by Mark Herzlich.

The Giants got to Wentz early, but the rookie settled down after the interceptions. The Eagles got on the board with a field goal midway through the first quarter and then they scored a touchdown on an 8-yard run by Ryan Mathews.

Mathews’ touchdown early in the second quarter pulled the Eagles within 14-10. The Giants quickly answered with Beckham’s second touchdown of the half, a 1-yard fade that capped a 6-play, 86-yard drive.

Next PostLife After Football With Former NFL Player From Brooklyn