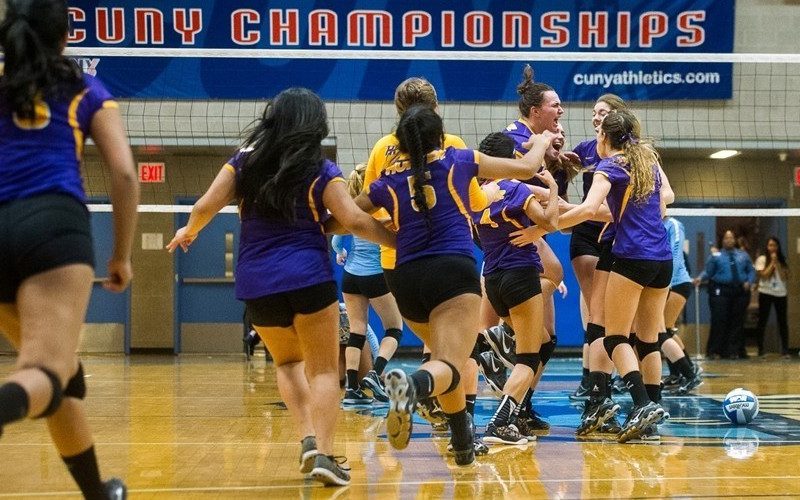 The first and second team all-stars were filled with four players from the regular season champion Hunter Hawks, while the runner-up Baruch Bearcats added three members to the all-star list. Staten Island and John Jay both contributed with two members, while Brooklyn rounded out the teams with one all-star.

Hunter’s Julia Connolly was named the CUNYAC Player of the Year for the second year in a row. Connolly earned the award after taking her team to an undefeated 8-0 conference record (19-14 overall) throughout the regular season giving the Hawks the #1 seed going into the conference tournament and an eventual CUNYAC Title. This season, Connolly averaged 3.7 kills per set, 2.09 digs per set while playing in 31 matches for the Hawks. The junior outside hitter was also named the CUNYAC Player of the Week three out of a total 7 weeks during the regular season.

2016’s CUNYAC Rookie of the Year selection was the Bearcat’s own Stephanie Cornwell. Baruch and Cornwell finished second in the regular season standings with a 7-1 conference record (13-24 overall) and were the CUNYAC tournament runner-ups. The freshman setter impressed in her first season of competition, averaging nearly 7 assists per set, 2.45 digs per set and a .231 hitting percentage to boot. In addition, the Kings Park, NY native was a six-time CUNYAC Rookie of the Week out of seven total weeks.

“No matter what accomplishments you make, someone helped you. I am grateful for all the support of my teammates and coaches this past season,” said Stephanie Cornwell, 2016’s Rookie of the Year.

Alyssa Broccoli, first year head coach at Hunter College, was honored as this year’s CUNYAC Coach of the Year following an impressive undefeated conference record and CUNYAC Tournament Championship victory. This season was Broccoli’s first as a collegiate head coach and she coached a total of five CUNYAC All-stars to a 19-14 overall record this year.

Brianna Montana of Brooklyn College finished off the major award winners after being named the Sportsmanship Winner following a vote by the conference coaches. The Sportsmanship team was rounded out with Alexandria Boachie-Ansah of CSI, Rachel Eng of John Jay, Veralucia Quispe from CCNY, Sumyia Razzak of Hunter, and Baruch’s Akilah Meulens.