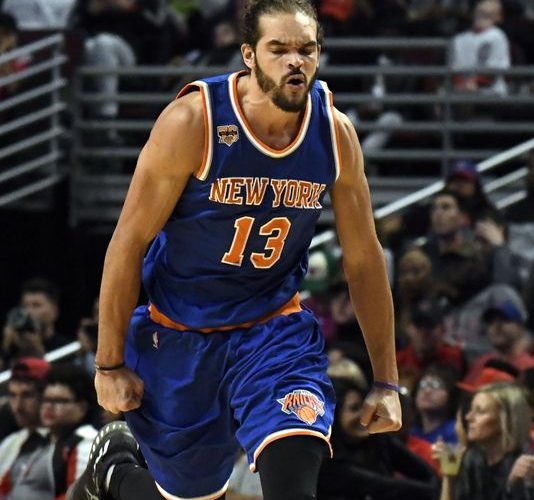 “We’ve used it a couple times this year and it was OK,” Hornacek said. “We haven’t done a ton of minutes that way. We have capable centers in Jo and (Willy Hernangomez) and Kyle (O’Quinn). So I don’t know how much we’ll use it. But I think we just saw at halftime that things were slow and it was an ugly game at that point. And then I said let’s go with KP at the five to start the second half.”

They never went back to Noah in the game and it worked this time. Will it work all the time? Probably not, depending on matchups and what they can get out of the smaller player they insert in the lineup. Monday it was Justin Holiday and he responded with his best game as a Knick, scoring 16 points. But there is no star to put in there, no one who has accomplished the sort of things that Noah has in his career.

But the point is that it is trying to find what works best for Porzingis and the team.

“It’s hard to say right now,” Porzingis said after Monday’s win. “I really focus on what I can do better as a (power forward). And then as a five obviously I feel more comfortable because (centers) give you more space. Honestly, I don’t know. I’ll keep playing the four if they play me at the four. And if at the five I’ll try to be as productive as I can at the five.”

Many scouts believe that center is the natural position for Porzingis, one where his unique skillset would be best utilized. For now though, with Noah healthy and just starting out this contract, it’s not likely to change.

“Coach made the decision and it worked,” Noah said. “It’s hard to win in this league and it’s a team game. I’m happy we got the W.”

“I think Jo is a real team player,” Porzingis said. “He doesn’t really care if he’s on the floor or not. He will try to help the team any way he can and if he believes that, and sees that, it’s better to play that way, that he’s on the bench for a little bit and then I’m playing at the five, whoever is at the five, then we will go with that. Jo has no problem with that. That’s what we love about him. He’s huge on the defensive end for us. I mean, of course he’ll be on the floor in the future.”