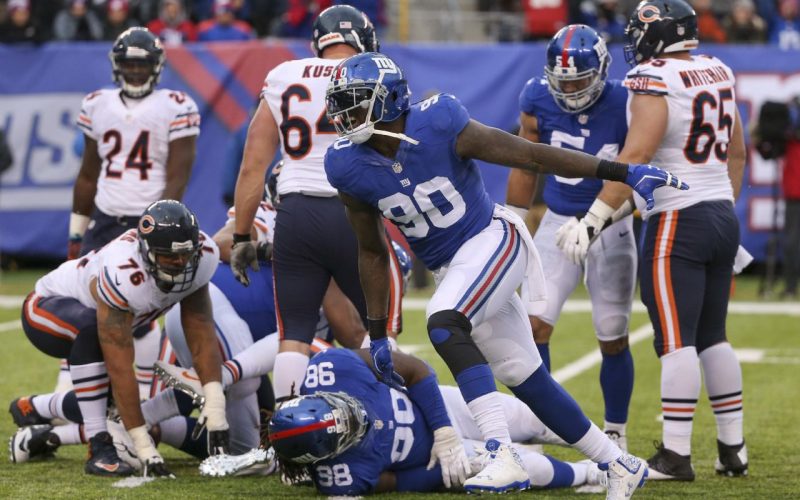 EAST RUTHERFORD, N.J. (AP) — The New York Giants are back and so is Jason Pierre-Paul.

Pierre-Paul had 2+ sacks in probably his most dominant performance since mangling his right hand in a fireworks accident on July 4, 2015. The Giants posted their fifth straight win by rallying for a 22-16 decision over the injury-plagued Chicago Bears on a windy Sunday at MetLife Stadium.

The winning streak is the longest in the regular season for the Giants (7-3) since 2010. It has them in position to make the playoffs for the first time since 2011. The Bears (2-8) are off to their worst start since 2002.

With winless Cleveland on the schedule next weekend, there is no reason for the Giants’ streak to end. The offense has been coming up with enough plays, and the defense has been nailing the door shut.

A concern for opponents is that the line is suddenly starting to get pressure. Olivier Vernonhad one of the Giants’ four sacks and JPP stole the show, his total matching the amount from the eight games he played last season after recovering from his injury.

”JPP is JPP, man,” Vernon said. ”Ain’t nothing changed about him. He is still a beast out there.”

After Eli Manning gave the Giants the lead with third-quarter touchdown passes to Will Tye and Sterling Shepard , the defense finished its second-half shutout. Of course, there was a little excitement.

After being limited to two first downs, Jay Cutler drove the Bears to the Giants 30 at the two-minute warning.

On first down, Pierre-Paul came around left end and got a strip-sack that cost Chicago 14 yards.

”I even told some guys that it is time to blow up, it is on us and guys responded,” Pierre-Paul said. ”I responded myself. I can’t just do the talking, I have to show up, and we came out with a win, guys.”

After a procedure penalty, safety Landon Collins iced the game with his fifth interception in the past four games.

”Anytime you can end the game on a play like that, that’s encouraging,” coach Ben McAdoo said. ”Sideline was fired up, we were fired up for Landon, he made a heck of a play.”

That’s the way it’s been for the Giants these days, which is a far cry from 6-10 records the team posted the past two years.

”Every game has been a little different; they’ve all been close, they’ve all come down to the last series,” Manning said. ”Offense, defense, everybody’s stepping up and doing their part to get wins.”

Here are some things learned in the game:

DECIMATED BEARS: The Bears are getting to the point where they are running out of healthy players .

Linebacker Leonard Floyd, who leads NFL rookie with five sacks, left the game on a stretcher in the fourth quarter with a neck injury. He was taken to a hospital for evaluation, and was later released and traveled with the team back to Chicago.

Gould missed two extra points and Barth missed an extra point and had a 51-yard field goal bounce off the upright.

”The first one I hit was where I was hitting them in pregame,” Gould said. ”I thought I made it and it went outside the left upright. The second one I just didn’t hit a good ball. Today was tough, but I have to make them.”

RUNNING GIANTS: New York is starting to find a running game. It rushed for 102 yards one week after running for 122 yards in a victory vs. Cincinnati. This is the first time the Giants have had back-to-back 100-yard rushing games since Nov. 30-Dec. 7, 2014 at Jacksonville and Tennessee. Rashad Jennings led the way with 85 yards on 21 carries.

BIG MOUTH: Linebacker Pernell McPhee bragged early in the week his defense was going to knock down Manning a few times on Sunday and add to Chicago’s sack total of 24.

The Giants’ offensive line shut kept Manning upright. He was not sacked.

”It was what it was, you put on the film, you’ll see,” McPhee said of the Bears’ pass rush. ”I think he ‘(Manning) did a great job of getting the ball out fast, he did a great job of mixing it up. I think we came in prepared and ready to rush, we just never got him behind the chains.”