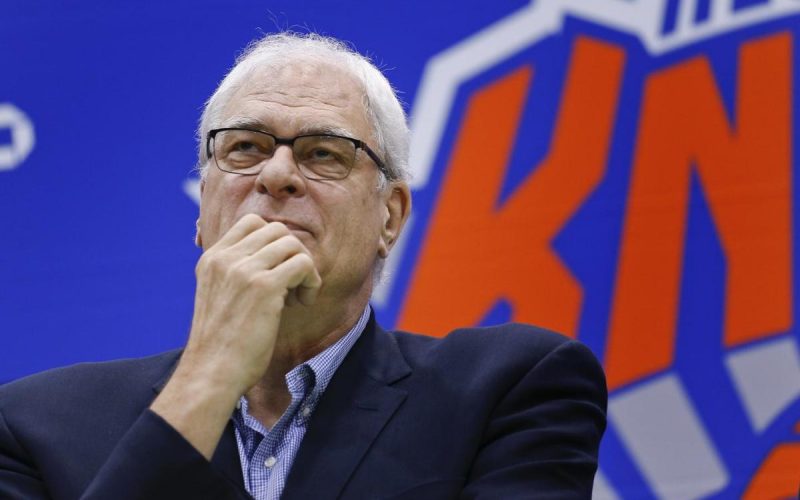 Phil Jackson would love to wipe the slate clean and pretend as if the previous two seasons never happened. He has previously claimed, for instance, that this season represents the first time he was able to handpick the roster in free agency — which was the same thing he said before last season.

And in a recent interview with ESPN that was published Monday, Jackson declared he’s sticking to his beliefs and plan — without mentioning that he’s already abandoned plans by overhauling the roster twice over consecutive summers.

“It’s a process of sticking to my beliefs and being able to say, ‘Whatever.’ This is what I was hired to do,” Jackson said about facing media scrutiny. “I’m going to follow the plan and if it doesn’t work out, it will be evident.”

So far, the evidence is a 52-121 record as team president of the Knicks. But, according to Jackson, one of the main reasons he was brought to New York on a five-year, $60 million deal was to build an offensive system. How’s that going? Jackson said he is not yet frustrated with the way the Knicks are running the triangle, but he’s not entirely pleased, either.

“No (I’m not frustrated). But when they run (the triangle) I want them to run it the right way,” Jackson said. “If you are going to do it, use your skills and run it the right way. I’m not frustrated at all. Derrick Rose missed three weeks of training camp (because of a civil trial). It’s totally understandable where we are as a ballclub. We have guards that do a lot of stuff off the dribble. I want them to understand they can do things off the pass. It has to be a combination.”

Jackson spoke a lot about the offense but was neither asked nor steered the interview to the defense that currently ranked as the worst in the NBA heading into Monday’s home game against the Mavericks. He had a lot of opinions on the offense, however, and why the Knicks won’t be emulating the Warriors or Cavaliers.

“It’s my feeling when everybody does the same damn thing it becomes, ‘Who has the best Rolls Royce? Who has the best, fastest stock car in this race we are running?’ So if you have LeBron, wow, we’re going to do the same thing even though we don’t have the Rolls Royce? You have to be unique. You have to have something no one else is doing to have genius in this game. It becomes an ownership. I don’t care about the triangle. I care about systematically playing basketball. If the spacing isn’t right, if guys are standing on top of each other, if there aren’t lanes to be provided, or rebounders available to offensively rebound the ball, or we don’t have defensive balance when a shot goes up, all of these things are fundamental basketball. I follow it. I’m not railing, ‘This is inadequate’ or ‘This isn’t right.’ Just show me what will work. Are we running around for no reason? Can we hit the first cutter? Do we have the ability to hit the second option or are we just bypassing plays so someone can hit a three-point shot? It doesn’t make sense to me.”

Jackson also reiterated what he said in September — that he hasn’t thought about exercising his opt-out clause at the end of the season and only put it in place because of the potential for a lockout. He said returning to the Lakers was never a priority, and especially not now with the team on the upswing under Luke Walton.

“They’re moving forward in the right direction,” Jackson said. “I have this job, this commitment.”

Interestingly, Jackson said he viewed Mike Conley Jr. as the best point guard in free agency but knew he was unaffordable — leading to the trade for Rose.

“Mike Conley was the best choice as a free agent, but he’s making $30 million a year. That’s almost insane. We saw that was going to happen,” Jackson said.