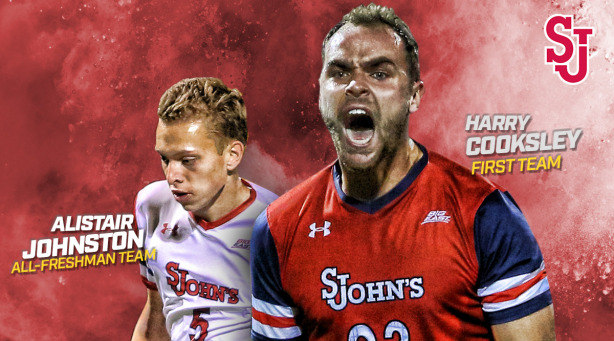 Nov. 5, 2016
QUEENS, N.Y. – The BIG EAST released its regular season awards on Saturday afternoon and the Red Storm could count two of its own among the ranks of the league’s best, as Harry Cooksley earned a spot on the All-BIG EAST First Team and Alistair Johnston received a nod to the BIG EAST All-Freshman Team.

Cooksley, a junior forward from London, England, found a place on the league’s top team following a stellar debut campaign at the Division I level, leading the Red Storm in points with 16 on five goals and six assists. The former Division II All-American at Limestone College ranks in the top 50 nationally and is tied for third in the league in assists, while leading the conference and ranking in the top five in the NCAA in shots per game (4.47).

A 6-2, 200-pound physical presence with soft feet and an incredible soccer IQ, Cooksley quickly proved himself as one of the league’s most electric players, recording a number of highlight-reel goals during his first season in Queens.

One of several promising young talents on the St. John’s roster, Johnston earned a spot on the All-Freshman Team following a rookie season that saw him rank third on the team in goals with four. The midfielder from Aurora, Ontario, got off to a quick start in the collegiate ranks, scoring three times in the team’s first four games of the campaign. Johnston added his final tally of the season at an opportune time, opening up scoring in the 38th minute with a miraculous header in the Red Storm’s 2-1 win over No. 11/14 Butler on Oct. 15.