St. John’s to Host No. 3/3 Villanova on Wednesday 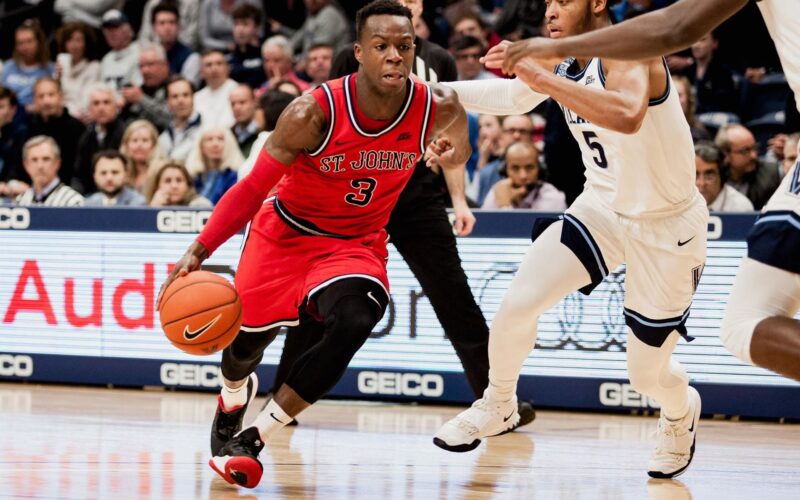 QUEENS, N.Y. – Victorious in four straight in five of its last six overall, the St. John’s men’s basketball team will welcome No. 3/3 Villanova to Carnesecca Arena on Wednesday for a 9 p.m. tilt.

The game will air live nationally on CBS Sports Network with Andrew Catalon and Steve Lappas on the call.  Fans can also hear the game on 570 AM WMCA with John Minko and Tarik Turner narrating the action live from Queens. The Learfield-IMG College Red Storm Sports Network radio broadcast will also be available through TuneIn Radio as well as SiriusXM.

Accustomed to meeting St. John’s at Madison Square Garden during a normal season, Villanova (11-1, 6-0 BIG EAST) will take the floor at Carnesecca Arena for the first time since Jan. 8, 1994.

The Wildcats will be the highest ranked opponent to come to campus in more than 40 years.  The last time a top-three team in the Associated Press Poll played at Alumni Hall/Carnesecca Arena. was during the first season of BIG EAST play, when the No. 7 Redmen dropped a 72-71 decision to No. 2 Syracuse on Feb. 16, 1980, on a last-second layup by Louis Orr.  St. John’s will be looking for its first win on campus against a top three team in more than a half-century, as Sonny Dove scored 28 points and grabbed 24 rebounds in a victory over No. 3 Saint Joseph’s on Jan. 19, 1966.

St. John’s is no stranger to knocking off highly touted foes, having already picked up three ranked wins in Mike Anderson‘s two seasons at the helm of the program.  The Johnnies last knocked off a top-five team in 2018, defeating No. 4 Duke at MSG and No. 1 Villanova in Philadelphia just three days apart in early February.

The Red Storm (11-7, 5-6 BIG EAST) will look to keep the momentum going from a pair of BIG EAST road wins last week at DePaul and Marquette.  Having also knocked off then-No. 23 Connecticut on Martin Luther King Day in Storrs, St. John’s has won three straight conference road games for the first time since 2013.  A win over the Wildcats would give the Johnnies their first four-game BIG EAST winning streak since the NCAA Tournament season of 2014-15.

Posh Alexander was named the BIG EAST Freshman of the Week for the second time in as many opportunities on Monday after averaging 15.0 points, 4.5 steals, 4.0 assists and 4.0 rebounds during the Red Storm’s 2-0 week.  Alexander has now claimed the honor on three separate occasions this season, tying Marquette’s Dawson Garcia, a top-50 recruit and a former McDonald’s All-American, for the league lead in that category.  On the season, Alexander now ranks second on the team in scoring with 11.0 points per game.  The Brooklyn native also leads the squad and ranks sixth in the BIG EAST with 4.4 helpers per outing while pacing the conference and ranking seventh nationally with 2.7 steals per contest.

Julian Champagnie claimed his second MBWA Met Player of the Week Award and was named to the BIG EAST Weekly Honor Roll for the second straight week after averaging 19.0 points and 6.5 rebounds in the team’s Midwest road victories.  The leading scorer in the BIG EAST this season at 19.8 points per game, Champagnie was lethal from beyond the arc, converting on seven of his 12 tries from three-point range in the wins over Marquette and DePaul.  In his last six BIG EAST games, Champagnie is shooting 51.2 percent (21-of-41) from distance.

The Red Storm, which has relied on its defense during its recent run of success, will try to contain a Villanova squad that leads the BIG EAST with 78.8 points per game during conference play.  In the team’s last five BIG EAST games, the Red Storm has allowed no more than 73 points in any one contest.  The Johnnies rank third nationally in steals (9.9), but the Wildcats turn the ball over less than any team in the country, coughing up just 8.3 possessions per game on average.

Leading the way in that category for Villanova is senior guard Collin Gillespie, who has 56 assists and just 12 turnovers in 12 appearances this season.  Gillespie, who averages a team-high 35.0 minutes per game, is also tied for the team lead in scoring with 15.5 points per game.

Sophomore Jeremiah Robinson-Earl also averages 15.5 points per outing for Villanova while leading the team in rebounding with 6.6 boards per contest.  Two other Wildcats are averaging double figures on the season, as sophomore Justin Moore pours in 13.5 per game while Tulane transfer Caleb Daniels adds 11.0 points per outing.

Villanova is the most frequently played opponent in St. John’s history, as the two teams have met 122 times in a series dating back to 1909.  The Wildcats currently own a 62-60 edge in the series history and have won three of the last five meetings.  The Red Storm’s last win against the Wildcats came two years ago at Madison Square Garden, as St. John’s erased a 19-point deficit in front a sold-out crowd of 19,812 to take down the defending national champions.