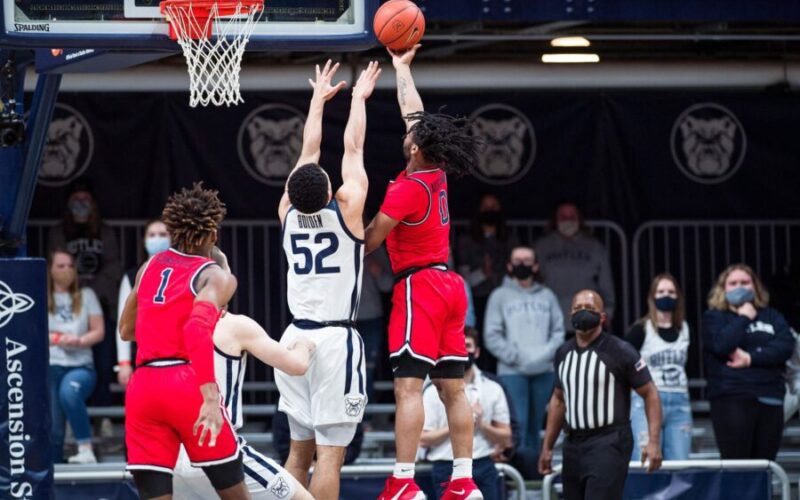 INDIANAPOLIS – The St. John’s men’s basketball team saw its six-game winning streak come to an end on Tuesday at Hinkle Fieldhouse, falling in overtime to Butler, 76-73.

St. John’s (13-8, 7-7 BIG EAST) led by as many as 16 in the first half and was in front by two with the ball and less than 30 seconds to go in regulation. Butler managed to force a turnover before Aaron Thompson sent it into overtime with a last second layup.

Butler (7-10, 6-8 BIG EAST) scored the first four points of the extra period before St. John’s ripped off five straight to take a 73-72 lead with 2:25 to go. Those were the last points the Red Storm would score, however, as Thompson converted on another layup and Myles Tate hit two free throws to seal the victory for Butler, which improved to 5-2 at Hinkle Fieldhouse in BIG EAST play.

Tuesday marked the third time in the last seven meetings between St. John’s and Butler that the game went to overtime. It was the first time a result went in favor of the Bulldogs.

The loss was the first for St. John’s on the road in exactly one month, as the Red Storm had rattled off four straight BIG EAST road wins since losing at Creighton on Jan. 9. The Johnnies’ four-game winning streak on the road in BIG EAST play was the longest such stretch by a St. John’s team since the Elite Eight season of 1998-99.

The BIG EAST’s leading scorer, Julian Champagnie tallied team-highs of 19 points and eight rebounds while blocking a pair of shots. Champagnie reached double figures for the 19th time in 19 tries this season.

Isaih Moore threw down five dunks and made three of his four tries from the charity stripe to finish with 13 points in 22 minutes of action.

Rasheem Dunn finished in double figures for the third time in his last four games. The redshirt senior guard from Brooklyn also dished out five assists and surrendered only one turnover.

BIG EAST and USBWA National Freshman of the Week Posh Alexander failed to reach double figures for the first since Jan. 16, tallying eight points, three rebounds and a pair of steals. Fellow freshman Dylan Addae-Wusu had seven points and a team-high six assists in a season-high 28 minutes.

After shooting 47.5 percent from beyond the arc in its last three games, the Red Storm hit just four of its 17 tries from distance, matching a season-low for 3-pointers made.

The loss was the first for St. John’s this season when leading at the intermission. The Red Storm was 11-0 with a halftime advantage entering Tuesday’s game.

Leading 12-10 with six and a half minutes gone in the game, the Red Storm unleashed an 18-4 run over the next seven minutes to open a 16-point lead.  Champagnie scored five points on the spurt, but it was Moore who stole the show, throwing down four rim-rocking dunks.

Trailing 30-14 after the St. John’s run, Butler responded with an identical 18-4 burst of its own, pulling back within two, 34-32, with just under two minutes remaining.  All but two of the Bulldogs’ points on the run came after Alexander went to the bench with his second foul.

The Johnnies managed to build its cushion over the final two minutes, holding Butler scoreless and tallying the last six points of the half to take a 40-32 lead into the locker room.

After building its lead back to double digits in the opening minute of the second half, St. John’s saw Butler begin to slowly chip away.  The Bulldogs took their first lead of the game, 56-54, near the eight-minute mark of the half.

With the Johnnies down by four, 60-56, with 6:26 to play, Champagnie drained a triple and Dunn hit a long two to put the Red Storm back ahead by one, 61-60, with just over five minutes remaining.  The lead change was the first of five over the final five-plus minutes of regulation.

St. John’s trailed by three with 2:40 to go before rattling off five straight points to take a 68-66 lead on an Addae-Wusu drive with 28 ticks left on the clock.  St. John’s came up with the stop on the ensuing possession, but a costly turnover with 12 seconds to play gave Butler the opportunity to force overtime.

Butler scored the first four points of the extra period before another Addae-Wusu drive and a Champagnie three-point play put the Johnnies back on top, 73-72, with 2:25 to go in the extra frame.  Despite a costly turnover and a missed one-and-one front end, St. John’s still had two looks to tie the game in the closing seconds.  The Red Storm worked to get Champagnie a look from three off sideline inbound, but his chance rimmed out.  Alexander battled to grab the rebound and throw up another chance, but his try was off-target.

St. John’s is scheduled to return to action on Feb. 16 when the Johnnies play host to Xavier at Carnesecca Arena.  Having already played nine BIG EAST games on the road, the Red Storm will close the regular season with five of six at home.