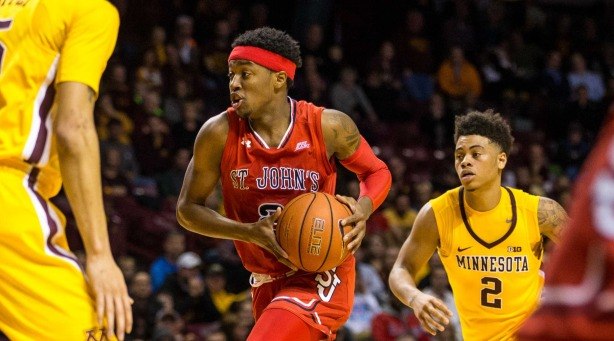 MINNEAPOLIS – Trailing by as many as 16 near the midway mark of the second half, the Red Storm whittled the Minnesota (4-0) lead down to as little as three points, but the Johnnies were unable to close the gap as the Golden Gophers held on for a 92-86 victory on Friday night at Williams Arena.

Marcus LoVett led St. John’s (2-1) in scoring for the second-straight game, pouring in 31 points and dishing out a team-high five assists. LoVett’s effort proved good enough for the highest point total by a St. John’s freshman since Moe Harkless scored 32 against Providence on Dec. 27, 2011.

Both eclipsing the 20-point mark for the second-straight game, LoVett and Ponds became the first St. John’s freshmen to record 20 or more in consecutive games since D’Angelo Harrison accomplished the feat in February of 2012 against UCLA and DePaul.

Trailing by 15, 59-44, with just over 12 minutes to play, the Red Storm unleashed a 9-0 run over the next two minutes, highlighted by triples from Ponds and LoVett. The Johnnies continued to fight over the next several minutes, eventually pulling within three on a Tariq Owens put-back slam with 7:21 to play.

Minnesota would bump its lead back to double digits at the 4:37 mark, but the Red Storm showed no signs of quitting, trimming the deficit back to five on four occasions in the closing minutes.

St. John’s came out firing against the Gophers to start the game, making four of its first six shots from the floor to take an 8-3 lead with just over four minutes gone in the game. Minnesota quickly responded with four answered to pull within one, 8-7, just over a minute later.

With the lead down to one, Ponds and Ahmed took over for the Red Storm, knocking down two triples a piece on a 14-2 run for the Johnnies. Ponds added the tear’s other two points on a tip-in, putting the Red Storm ahead 22-9 at the half’s second media timeout.

Down by 13, the Gophers unleashed an 18-3 run over the next 6:17 of game action, erasing the deficit and moving ahead by two, 27-25, with just over five minutes remaining until the intermission.

Minnesota continued to hit down the stretch, extending its run to 32-9 and taking a 41-31 lead into the locker room.