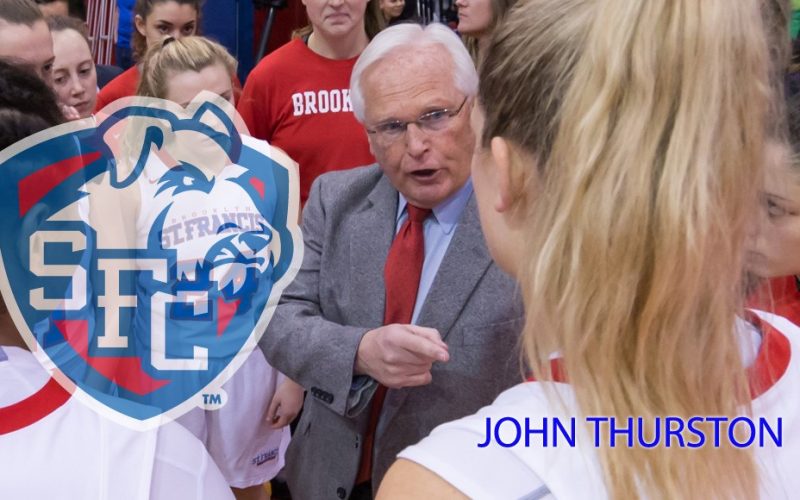 2014: Most victories ever recorded in a season for the St. Francis Women’s Basketball Program.

2016: Number One Ranking in the entire Nation in Team GPA.

However, two questions loom large over the Terrier Program, going into the 2016-2017 season.

Number One: How do you continue to maintain that noteworthy level of accomplishment in the classroom without sacrificing or compromising comparable success on the basketball court — and vice-versa?

Number Two: How do you replace one of the best all-around talents to ever wear the Terrier Red and Blue — four-year starter and inspirational team leader Leah Fechko?

Head Coach John Thurston believes that it’s always going to be tougher to retain that academic edge over the competition, rather than the athletic edge.

“For individual collegiate athletes to have respectable GPAs and remain in good academic standing in order to compete in their sport, that’s a pretty common occurrence,” says Thurston. “But to consciously compete for a national title in GPA, every single member of a team has to succeed, and succeed at the highest level possible.”

“The pressures that all of these kids endured to accomplish something like this is really hard to imagine,” he continued. “During a basketball game, if your 8th and 9th players are not performing well, there are other players who’ll step up and win the game for you. But, in order to win the National GPA Championship, every student-athlete on that team must perform well – every single one of them.  All of them feel that being the number one team in GPA is pretty much the academic equivalent of having an undefeated season. There can be no bad grades by anyone. A single “C” grade could possibly mean that your team doesn’t win that number one ranking.”

Thurston noted that the accomplishment takes an incredible amount of focus and effort by all of the players on a daily basis. “Some days, you’ll feel tired after a game or practice, but you still have to apply yourself, so you don’t let the other members of your team down,” he said. “Everybody on the team has to be close to perfect – everybody – in order to win that team GPA honor. That’s really tough and takes true dedication and self-discipline.”

“We had been really close to winning that Number One GPA Ranking for a couple of years, but this past year we had seven freshmen join the team, so we anticipated that achievement would be a bit more difficult,” Thurston continued. “But their ability to quickly focus, adapt to an NCAA Division I regimen, and battle an unaccustomed level of physical and mental fatigue was remarkable.”

“I’m really proud of the type of well-rounded individuals we have in our Program,” he said. “There are about 67 colleges and universities in the Tri-State Region, and our women’s basketball team has had the highest GPA of any team in the area during the last four years. You have to remember that there are three Northeast Conference awards presented for women’s basketball every year – one for the Championship, one for the Academic Championship, and one for Sportsmanship. Our Program has won 9 out of those 12 awards over the last four years. I’m proud of what we have been able to accomplish. It’s really gratifying.”

“I believe that the type of focused kids we currently have on the team will allow us to keep chasing that Number One Academic Ranking. I’m confident of that,” Thurston happily noted.

“People ask me all the time how do we stay on top of all of the kids on the team to make sure they study and succeed,” Thurston said. “I tell them that we really don’t have to do anything. It’s the kids who are self-disciplined and dedicated. They do all of it on their own initiative.  Our coaching staff, Dionne Dodson, Kaitlyn Vican and Renait Griff, do a great job bringing in hard-working student-athletes with great academic credentials. The players want to succeed and attain that team GPA goal.”

“But, it’s all of the team members who are truly responsible for that success,” he stated modestly. “They do it, not us.”

Having lost Leah Fechko, a true leader to whom Thurston was able to turn last year, to graduation and a professional basketball career for the Killester Basketball Club in Ireland, does he feel as confident about the athletic side of that two-part equation?

“When you lose a top scorer from your team, it’s not a disaster because you can generally find a number of alternatives and options to possibly replace those points, making a scorer much easier to replace,” Thurston noted. “But having to replace someone who was your team leader in every single statistical category, that’s quite a bit tougher,” he said. “Leah was a special player. She stepped up and made things happen in so many ways. Her leadership and work ethic will most certainly be missed as much as her scoring and rebounding.”

Since that All-Northeast Conference First Teamer and Conference Defensive Player of the Year has finally moved on, who will fill that talent void?

“Thankfully, there are a number of kids that can help us replace some of the ability we lost,” Thurston explained. “The team we have this year is possibly deeper than last year’s squad – and that’s a real plus.”

“Looking at last year’s team, you knew that Leah was likely going to lead the team in scoring. It’s different this year. There are about 6 or 7 players who we know have scoring ability and who could emerge as the team’s top scorer,” he said. “Actually, we’re looking for the entire group to step up their game in all facets, and we think they’re certainly capable of it. Because of the depth, there’s plenty of competition. Competition is one of the best motivators.”

“The year we went to the NCAAs, we had four established senior starters. This year, we could have different starting lineups or we may even ‘platoon’, running groups in and out of the lineup, rather than making individual substitutions. I’ve done that in the past in similar situations,” he said.

Last year, Thurston estimated that the infusion of a very talented seven-person freshman class would push the Terriers into the NEC’s upper tier by the second half of their sophomore year.  However, a rash of injuries among some members of that heralded recruiting class may set that timetable back a bit. Guard Mia Ehling never played a minute all season. Point guard Etta Andersen only played the first nine games before injury bumped her to the sidelines. Forward Dana DiRenzo wound up missing practically the entire Conference portion of last year’s schedule, while forward Lorraine Hickman joined her teammates on the sidelines for most of season.

This year, three promising newcomers join ten returning players for the Terriers. All three incoming freshmen arrive from abroad – two from Australia and one from our neighbors to the North, Ontario, Canada.
Although Thurston believes that the talent level throughout this year’s roster appears to be pretty even, he emphasized that the talent level was high – and would make for some very intense practice sessions. “It’s unusual that I can’t tell you who will play the majority of the minutes,” he said.

Assessing the point guard position, he believes that sophomore Etta Andersen, from Copenhagen, Denmark, will continue the steady development that was interrupted by injury last year. “Etta is a very strong player, has nice size for a point guard at 5-8, and is a real good athlete,” Thurston said. “She’s very aggressive and is a high energy player.  She’s very offensive-minded. She makes things happen and will only get better with experience.” Andersen, who played for Denmark’s Under-18 National Team, saw action in only 9 games, averaging 2.6 points in her injury-shortened first year as a Terrier.

Meg Crupi, one of the two Australian freshmen, has been described by Thurston as a “true pass-first point guard who handles the ball extremely well” and who has a reputation for avoiding turnovers. The 5-8 newcomer from Melbourne can hit the three-point shot, but, as a first year Terrier, will concentrate primarily on play-making and distributing the ball to her teammates.  “Meg’s high-level experience playing in Australia with the Victoria State team and her Diamond Valley club team should help accelerate her development as a freshman,” Thurston remarked.

Sophomore Mia Ehling sat injured on the sidelines last year and never saw a minute of court time. As a result, she really is a first year collegian in terms of experience. At 5-8, the Holmdel, New Jersey native is capable of playing either the point or the off-guard position, and she has shown that she’s a natural scorer and a very talented offensive player. “Because of her scoring ability and versatility, we will find a way to get her on the court,” he said.

The shooting guard role appears to be 5-6 Sophomore Kat Phipps‘ best natural position as a collegian. Kat arrived at St. Francis from Spring Lake, New Jersey as a highly-touted long shooter who set the Garden State’s high school record for most career three-pointers. In fact, Thurston believes that it will be a long time before her incredible total of 237 treys is ever broken. Although she had a somewhat inconsistent first season on Remsen Street, averaging 4.1 points and 1.4 assists per game, Thurston noted that “Kat has a great work ethic and worked extremely hard this entire summer improving her all around offensive game.” Thurston is, however, counting heavily on her to replace some of that timely long-range scoring that Leah Fechko took with her to Dublin this summer.

Jade Johnson is the second of the two Australian newcomers to join the Terrier roster this year. “Jade’s a very good player whom we believe can handle either the off-guard or the small forward position for us,” noted Thurston. He describes the 5-10 freshman from Adelaide as “a legitimate everyday player who’s an outstanding shooter with great range on her shot.” Thurston believes that Johnson will be able to adapt quickly to the physical play of the Division I opponents and flourish because of her experience in the women’s leagues in Australia.  Johnson was the leading scorer for both the U23 and senior women’s teams while playing for the Sturt Sabres in the Premier League.

Thurston was extremely pleased to see the emergence last year of Maria Palarino, a sophomore out of Irwin, Pennsylvania, as a solid, all-around small forward. Palarino started 24 games out of the 29 games, shooting over 50% from the floor. He noted that, “Her versatility allows her to do a bit of everything for us.”  He believes that the Pittsburgh area native, who’s the highest returning scorer for the Terriers with 8.6 points per game, should be able to post double-figure games consistently because of her stamina, strength and focus. Palarino averaged 30 minutes per game last season, while registering 4.1 rebounds and 1.9 assists in her freshman year. For her efforts, she was named to the Northeast Conference’s 2015-16 All-Rookie Team.

Next PostDI MAULO NAMED BIG EAST FRESHMAN OF THE WEEK