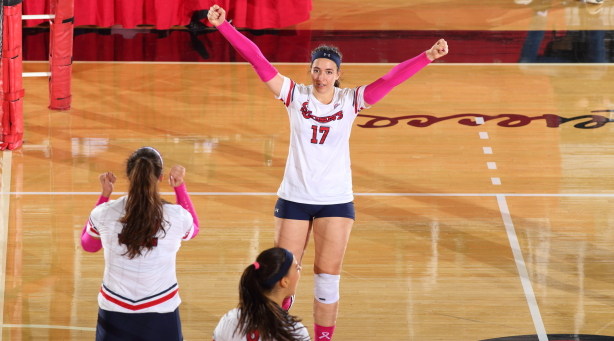 QUEENS, N.Y. – Following a 1-1 week for the Red Storm, which included a come-from-behind victory against BIG EAST foe Seton Hall, Erica Di Maulo was named the BIG EAST Freshman of the Week for the second-time this season, as announced by the conference office on Monday afternoon. St. John’s (11-7, 2-3 BIG EAST) opened the week at longtime BIG EAST rival Villanova on Tuesday night, but was topped in four sets. Di Maulo, a newcomer from Milan, Italy, distributed 44 assists and notched seven digs against the Wildcats. This past Saturday, the Johnnies dropped the opening-set to Seton Hall, but Di Maulo and the Johnnies stormed back to win the match, 3-1. The freshman setter was sensational on the offensive side of the ball, dishing out a match-high 50 assists and recorded a season-high five aces.It was the third time this season Di Maulo has reached the 50 assist mark in a match, and she has now registered at least 40 assists in five of the team’s last six matches.Her offensive game was very efficient last week, picking up eight kills on a .421 hitting percentage. She did not record one hitting error in her 19 attempts and also added five total blocks in the two conference matches.Di Maulo becomes the third Red Storm volleyball player ever to win BIG EAST Freshman of the Week twice in one season, and the first since Robyn Kurasaki earned this honor four times in 2000. Next up, St. John’s will face Marquette, who made the NCAA Tournament last season, on Friday, Oct. 7 at 5 p.m. at Carnesecca Arena. The next day, the Red Storm will battle with DePaul at 4 p.m., with both of these conference matches airing on ESPN3.