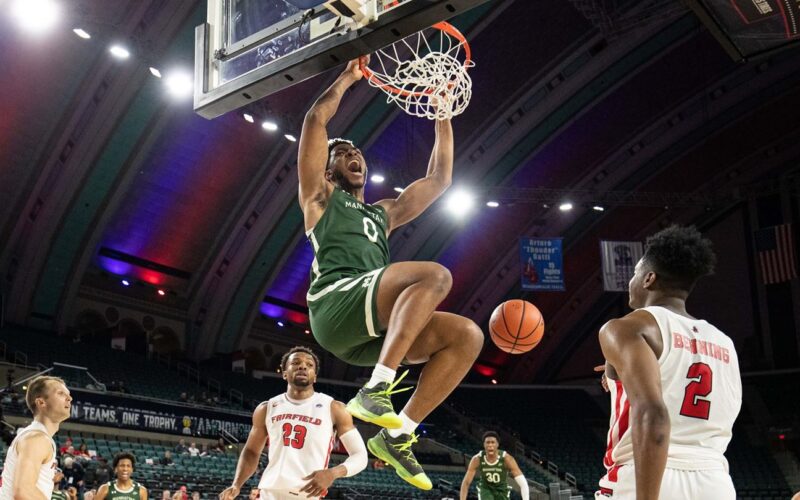 Manhattan-Fairfield Notes
* The Jaspers can be as high as the No. 5 seed, or as low as the No. 11 seed for the upcoming MAAC Tournament.
* DYK? Fairfield is 5-3 in the second games of back-to-backs, while Manhattan is 4-4.
* Last season, the Jaspers dropped both regular season match-ups to Fairfield before defeating the Stags 61-43 in the MAAC Tournament with senior Samir Stewart scoring 11 points with six assists, against one turnover, with senior Nehemiah Mack adding seven points and a career-best matching seven rebounds.
* Two years ago, senior Ebube Ebube scored a career-high 20 points at Fairfield en route to averaging 14.0 ppg and 6.3 rpg over three games against the Stags for the year.

Quick Hits
* Junior Ant Nelson scored 22 of his career-high matching 27 points with a season-best matching six assists in the opener at Siena.
* Nelson, who has scored at least 20 points three times, averaged 19.5 ppg, 3.5 rpg and 3.0 apg last weekend.
* The teams have met in the MAAC quarterfinals in each of the last two years, with Manhattan winning both times.
* Junior Elijah Buchanan scored 18 points in the finale at Siena, on the heels of being named MAAC Player of the Week following his performance against Iona.
* Buchanan earned the weekly MAAC Citation after averaging 20.5 ppg, 9.0 rpg and 5.0 apg, 3.0 spg and 1.5 bpg over two games vs. Iona.
* In the Jaspers’ 77-70 win over the Gaels in the finale, Buchanan notched career-highs with 26 points, 13 rebounds and seven assists.
* Junior Warren Williams registered his fifth double-double with 12 points and 10 rebounds in the finale against the Gaels.
* Both Williams and Buchanan each registered double-doubles against Iona, marking the first time a pair of Jaspers did so in the same game since February 2, 2018.
* Williams is averaging 13.4 ppg and 9.0 rpg over his last nine games with four double-doubles.

Scouting Fairfield
* Richmond transfer Jake Wojcik paces the Stags in scoring at 12.9 ppg, while Taj Benning is also averaging in double-digits at 12.1 ppg, to pace an offense that is averaging a league-low 61.1 ppg.
* Fairfield, like Manhattan, is extremely successful when holding teams to less than 60 points, as the Stags are 5-0 when keeping teams from hitting the 60-point threshold.
* The Stags also lean heavily on Holy Cross transfer Caleb Green (7.6 ppg, 2.8 apg) and Jesus Cruz (8.6 ppg, 3.6 rpg).

Coach Masiello Quick Hits
* In head coach Steve Masiello‘s 10 years at the helm, the Jaspers are 62-12 (.838) when holding the opposition to less than 60 points, and 47-18 (.723) when registering double-digits in steals.
* He is the longest tenured MAAC coach, and with the win over Quinnipiac moved past Jack Powers into third place on the all-time Manhattan wins’ list. In December, he also set a school record for wins at Draddy with an 87-77 triumph over Rider.
* Manhattan turned Marist over at least 20 times in each match-up, doing so in back in back-to-back games for the time since early in the 2018-19 season (UNC Asheville, George Washington), and are 28-17 (.622) when forcing at least 20 miscues in Masiello’s 10 years.

Getting Defensive
* Manhattan leads the MAAC and is 24th nationally with a league-best 12.8 offensive rebounds per game, while also ranking among the NCAA leaders in forced turnovers (15.7/game-36th), steals (7.5 spg-68th), scoring defense (67.2 ppg-90th) and three-point field goal percentage defense (.321-91st).
* Fueled by its stellar defense, the Jaspers are 4-1 when limiting teams to less than 60 points, highlighted by holding the Purple Eagles to less than 60 points in each victory.
* In Manhattan win over Iona, the Jaspers scored a season-high 47 first-half points while making good on a season-best 44.4 percent (8-of-18) from deep.
* The Jaspers also registered a season-high 14 steals in the opener at Iona.
* In the Niagara opener, Manhattan forced the Purple Eagles into a season-high 19 turnovers, while notching 11 steals.
* The Jaspers pulled down 30 rebounds in the first half in the finale against Monmouth, en route to registering a season-high matching 50.
* The Green & White also grabbed 50 in the opener at Quinnipiac, which was the most since snaring 51 at Marist on January 2, 2017.
* Manhattan then yielded a season-low 42 points in the win over Quinnipiac, while also turning it over a season-low six times.