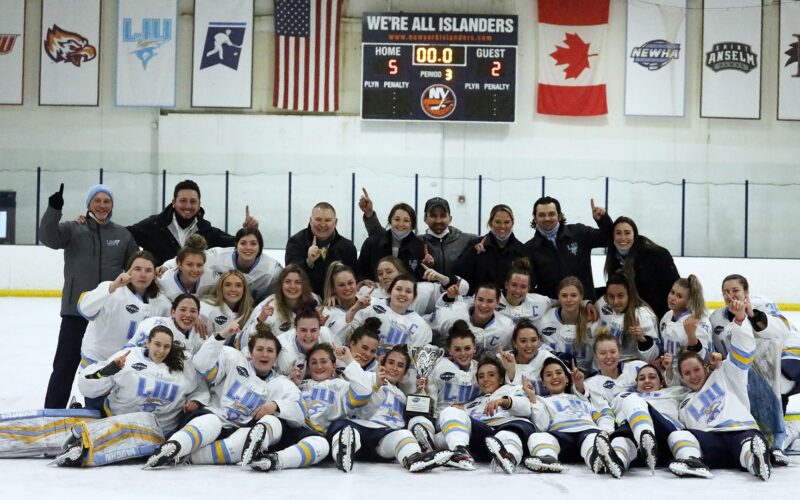 SYOSSET, NY. – The LIU women’s hockey team took game two of the best of three Commissioner’s Cup series at Ice Works Thursday afternoon, beating Sacred Heart, 5-2. The NEWHA rivals were playing in an abbreviated series for cup honors, which the Sharks brought home to Brookville for the second year in a row.

The Sharks won game one of the series on the road Tuesday, beating the Pioneers 3-2 in overtime.

Thursday, Sacred Heart got on the board first, scoring a power play goal in the first period to take a 1-0 lead. The Sharks wouldn’t tie it up until the second period, when sophomore Matilda af Bjur scored with just over 14 minutes left to tie it up. She was assisted by Alva Johnsson and Paula Bergström.

The two teams would stay tied at 1-1 until scoring erupted in the third period. The Sharks scored three quick goals to shoot out to the lead.

The first goal came when Julia Hoffmann would score an unassisted goal on a breakaway, to make it 2-1. Less than a minute later, Carrigan Umpherville would score the eventual game-winner, with help from af Bjur and Alex Thomas, to make it 3-1.

90 seconds later, af Bjur would score again, with assists credit to Johnsson and Morgan Schauer to increase the lead to 4-1.

Sacred Heart would score once more with 11 minutes left, giving the Pioneers a renewed sense of urgency as the clock wound down, but af Bjur would dash their hopes, scoring on an empty net to notch the hat trick, and give LIU the 5-2 win.

Next PostManhattan Wraps Up Regular-Season Play Against Fairfield