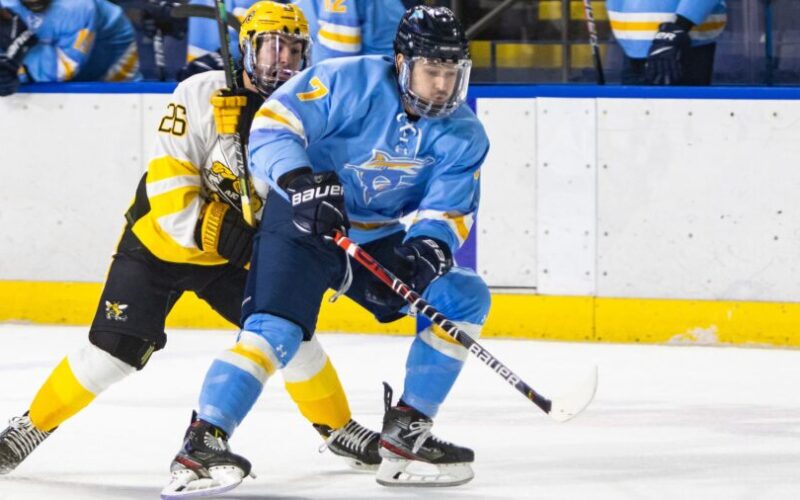 HAMDEN, Conn. – For the fifth time in their first season, the LIU men’s hockey team battled a nationally-ranked team, taking on the No. 12 Quinnipiac Bobcats on the road Monday. The game was their first in nearly three weeks. The Sharks fell to Quinnipiac despite a strong early start, 7-1.

The Sharks stayed close with Quinnipiac in the first and third periods, but a five-goal spree in the second would be the difference.

As the game got underway, LIU would hold the Bobcats scoreless for nearly the first ten minutes of action. The home team would score on a power play eight and a half minutes in to get on the board, 1-0. But the Sharks would answer just six minutes later.

Freshman Jordan Di Cicco would score an even strength goal for LIU, with the assist credited to classmate Madoka Suzuki, tying the game up 1-1.

Early in the second period, the Bobcats scored quickly, with back-to-back even strength goals in the first three minutes to leap ahead, 3-1. Later in the period, a power play goal made it 4-1. The home team would add two more in the second period and one in the third period to win by a final score of 7-1.

Senior Garrett Metcalf had 41 saves in net for the Sharks. On defense, LIU would block 28 of Quinnipiac’s 84 shots, led by seniors Mat Harris and Zack Bross, who had four blocks each. 12 different Sharks would register a shot block in the loss. Freshman Nolan McElhaney, Brett Humberstone and Tanner Hopps each had three goals on net for LIU.

Up next, the Sharks return to Tate Rink at Army West Point, for a two-game series with the Black Knights, Friday the 26th and Saturday, February 27.