Odell Beckham On Pace To Become Best WR of All Time 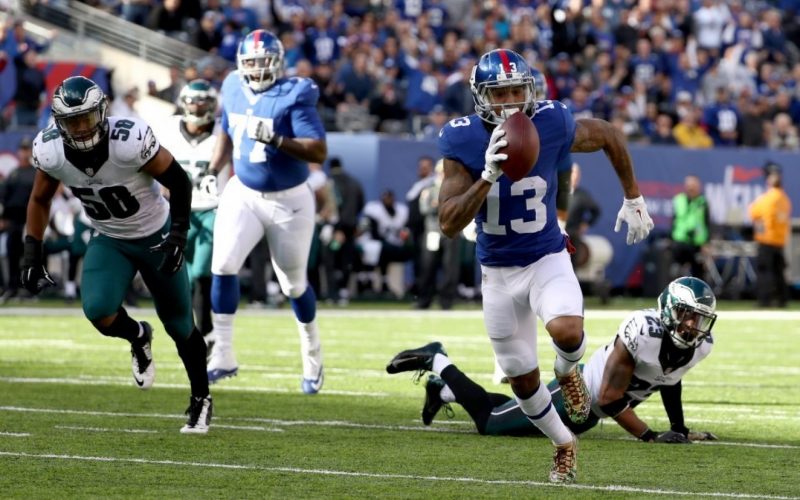 Brace yourself, because I am about to say something that may sound like football heresy: Odell Beckham Jr. could overtake Jerry Rice as the best receiver of all time.

I know — it’s still early in Beckham’s career — but don’t dismiss it so easily.

Beckham caught two touchdown passes in Sunday’s win over the Philadelphia Eagles, making him the first player since the 1960s with 30 receiving touchdowns in his first 35 games. Rice had only 22 at the same point of his career. It was also the seventh time Beckham had caught at least two touchdowns in a game. The only players since the merger with more such instances through 35 career games are New England Patriots tight end Rob Gronkowski (nine) and San Diego Chargers wide receiver John Jefferson (eight). Randy Moss is the only other player with seven. Rice had five.

Beckham also has more receiving yards through his first 35 games than anyone has ever had, slightly edging out Charley Hennigan, who amassed 3,338 receiving yards while playing for the Houston Oilers of the AFL. Rice had 2,778 receiving yards through his first 35 games, good enough for No. 10 all time.
And Beckham has done all this with just an average passer throwing him the ball. According to ESPN’s Total Quarterback Rating, Eli Manning ranks 18th out of 32 qualified passers, close to where Football Outsiders has him ranked, at No. 17. The game charters at Pro Football Focus are less impressed, ranking Manning No. 24 out of 30 passers playing at least half of their team’s snaps. Rice had Joe Montana and Steve Young under center for most of his career, arguably two of the best quarterbacks ever to play the game.

Manning also has completed a league-average 63.2 percent of his passes over the past few seasons. Montana and Young both led the league in completion percentage five times, with Young winning the crown in four straight years, from 1994 to 1997. Manning has only led the league in interceptions, doing so during the 2007, 2010 and 2013 seasons.

Having a quarterback like Manning under center is both a curse and a blessing. Since Beckham entered the league in 2014, the Giants have won a total of 17 games, with zero playoff appearances. The San Francisco 49ers, meanwhile, won at least 10 games in each of Rice’s first three years, qualifying for the postseason in each of those seasons. In fact, the 49ers won at least 10 games for the first 14 seasons of Rice’s career, winning three Super Bowls in that span as well.