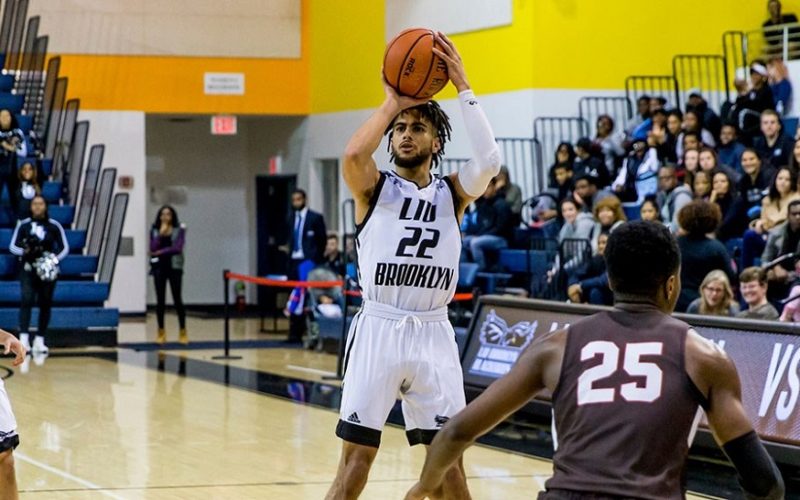 Junior Raul Frias made seven three-pointers to lead the LIU Brooklyn men’s basketball team past Saint Peter’s University Saturday afternoon, 74-58. The 21-point effort was a career-high for the junior, as he went 7-for-10 from three-point range. Frias was just one of four Blackbirds to score in double digits in the win, that helped LIU move to 5-4 on the season.

Senior Raiquan Clark had a double-double with 16 points and a career-high 15 rebounds, while sophomore Ty Flowershad 15 points, and junior Julius van Sauers had a season-high 13 points.

The home team had the lead early in the first half, but three-pointers from both van Sauers and Flowers would help keep LIU in the game. The Blackbirds would take their first lead on the contest at 13:30, when junior Julian Batts hit a three-pointer to make it 13-12. The two teams stayed close from there, until the Peacocks used a 7-0 run to go up, 27-20. But with just under seven minutes to go, Frias made his first three. The Miami, Fla. native then made two more, single-handedly putting the Blackbirds ahead, 29-27 with 4:34 to play. Flowers hit another three with just under two minutes to go, but the two teams would go into the halftime break tied, 34-34.


At the start of the second half, the Blackbirds would start to put together a 12-4 run of their own, sparked by a three-pointer from Batts. Frias then hit two more threes, and Flowers had a traditional three-point play that put LIU on top, 46-39 with 15:37 to play. The Blackbirds would widen the lead with a 15-2 run that spanned five minutes, taking a 68-50 lead with 4:32 to go. Clark would add another layup and a three-pointer to keep the Blackbirds ahead, and LIU held on to the cushion to beat the Peacocks, 74-58.

NOTES FROM THE NEST