Derrick Rose: Training camp with Knicks best of my career 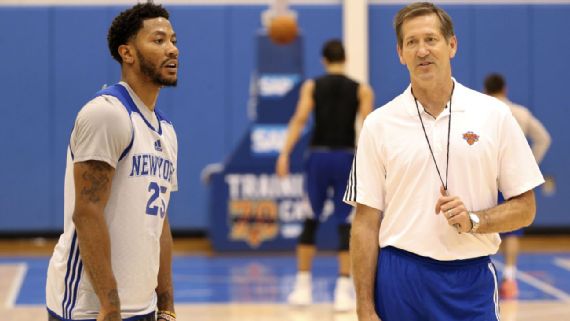 WEST POINT, N.Y. — Derrick Rose, whose injury history is well documented, said on Saturday that he feels as if he’s in “great condition” and that his training camp with the New York Knicks during the past week has been the best of his career.

“I look at it as the years that I’ve played on the league, this the most focus I’ve had knowing the situation, what I’m getting myself into,” Rose said. “The big year we have ahead of us. We’re focused, we’re dedicated, that’s all you want from this group.”

Rose added that Knicks coaches have been impressed by his stamina, which is measured by a wearable technology that the Knicks players use during practice.

“This is my first time paying attention to it,” Rose said. “And the training staff went into depth about how hard I go and how much distance I cover and the impact of how I just play. And they have to kick me off the court here and there cause of how hard I work.”

The health and stamina of Rose, who has missed two training camps due to injury in the past five seasons, is paramount for the Knicks.

Phil Jackson overhauled the roster in the offseason, building a team built to win immediately. Rose was the key acquisition of his offseason.

Knicks coach Jeff Hornacek and some players have been impressed by what they’ve seen from Rose in training camp.

The key for Rose, of course, is to stay healthy during the regular season. He has played in 39 percent of his games during the past four seasons.

Rose has spent time this training camp learning his teammates and getting acclimated to the Knicks’ offense.

“It’s open. [There’s] more weapons. But they allow me to play the way I know how to play and that’s an up-tempo game. And to attack, downhill,” said Rose, who is set to be a free agent after the season.

Hornacek will use aspects of the triangle offense in half-court sets. Rose said earlier in the week that the triangle sets were “foreign” to him and “complicated” but that he saw the opportunity to be creative in the offense.

“I think the more we work on it and the way the coaches are putting it into the offense, it’s [going to get a] little bit easier,” Rose said after Thursday’s practice. “[There’s] like 40 to 50 options on one side of the floor. It’s like giving you your space for creativity. It’s like if you’re doing it the right way, you could do everything you want, you could freelance but you just got to know where you’re going.”

Rose and the Knicks begin the preseason on the road Tuesday against the Houston Rockets. Rose may miss the game and subsequent time in the preseason because the civil trial set to begin Tuesday in which he and his two friends are accused of rape.

Rose said Saturday that he expects to be with the Knicks on Tuesday in Houston. He reiterated that the pending trial hasn’t been a distraction.

“I’m sensitive to the subject and the topic but in my mind I feel like I didn’t do anything wrong so I can’t waste a lot of time thinking about it. I have a great [legal] team handling it,” he said.

Rose added that, if he were to miss time while attending the trial, he would remain physically fit by exercising in his room.

“I do penitentiary workouts, bro. [I’m] in my room doing push-ups, sit ups. I got it from Lamar Odom,” Rose said. “…. It’s stretching and working on my body, flexibility.”