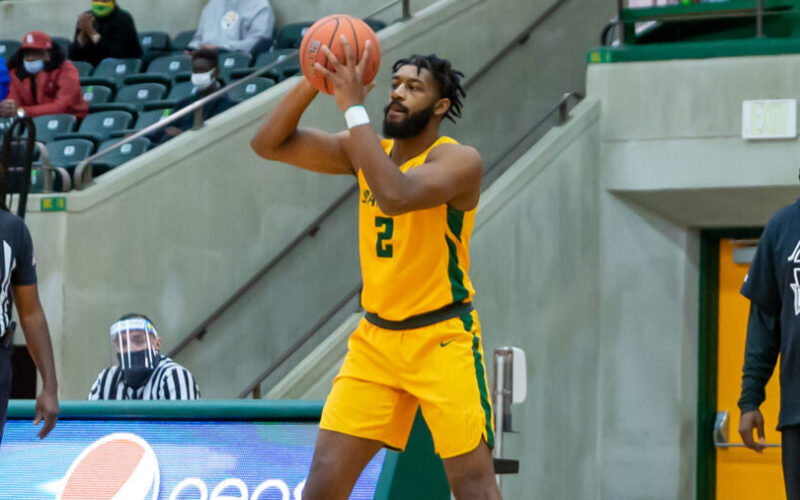 2019-20 (Redshirt Junior Year)
Played in 29 games and made one start … Averaged 4.9 points and 2.7 rebounds in 14.8 minutes per game … Shot 40.8 percent from the floor (42-of-103), including 24-of-64 from deep (37.5 percent) … Also made 33-of-42 from the free throw line (78.6 percent) … Finished the year with 141 points, 78 rebounds, 11 steals, 10 assists and one block … Had three games with 10 or more points, including a season-high 13 twice … Tied his career high by hitting three 3-pointers and shot 4-of-9 overall for 13 points with six rebounds in a win over the Apprentice School on Nov. 14 … Also made all three 3-point attempts, including a pair late in regulation, and all four free throw attempts for 13 points with three rebounds in an overtime win against Bowling Green on Dec. 20 … Scored 12 points on 4-of-6 shooting with a season-high eight rebounds in a win at Copin State on Jan. 6 … Finished with nine points against Caldwell on Nov. 26 … Went for nine points and five rebounds in a win over Florida A&M on Jan. 27 … Started the year with eight points on 3-of-6 shooting and five rebounds in a win over Greensboro College on Nov. 5, and five points and four boards in a victory against PSU Wilkes-Barre on Nov. 8 … In victories over Bethune-Cookman on Jan. 4 and South Carolina State on Jan. 25, tallied seven points and three rebounds, and seven points and four rebounds, respectively … Posted five points and six boards in a victory over Maryland Eastern Shore on Jan. 18 … Played in a season-high 27 minutes at Hampton on Dec. 7 and against Drexel on Dec. 21 … Ended the season with six points and five rebounds in a win at Morgan State on March 5.

At Central Connecticut State (Freshman Year – 2016-17)
Did not compete.

High School
Earned Class AA honorable mention as a junior at The MacDuffie School in Granby, Massachusetts, competing in the New England Preparatory School Athletic Council … Ranked 14th in the state of Massachusetts in the Class of 2016 by New England Recruiting Report … Averaged 17.0 points per game as a sophomore at Berkeley Carroll School in Brooklyn … Also had offers from Chattanooga, Fairfield, Iona and Manhattan.

AAU/Club
Played for the PSA Cardinals and the NYC Jayhawks.

Personal
Full name is Kashaun JL Hicks … First name is pronounced Kuh-SHAWN … Born on Jan. 3, 1997 … Son of Latoyia Carter and Kashaun Hicks … Has one younger brother, Kaden … Majoring in media/communications while in grad school … Wants to pursue a pro career then go into coaching … Enjoys reading, writing, listen to music and the spoken word.