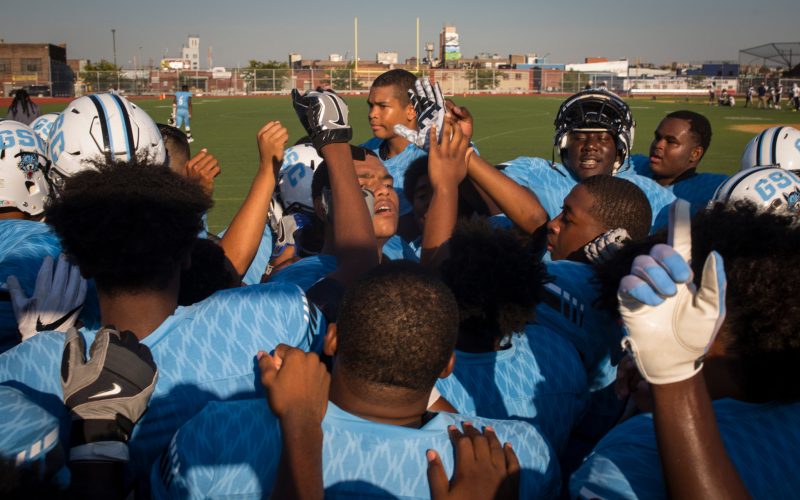 Last December, on a cold, sunny morning at Yankee Stadium, Bruce Eugene, the head football coach of the Grand Street Campus Wolves, took his players on a slow walk through the grounds to calm their nerves. Though they would soon be playing for the Public Schools Athletic League championship, this field, he assured them, was no different than their turf back in Brooklyn.
A few hours later, the Wolves had defeated the Erasmus Hall Dutchmen, 28-26, to claim the title. (Video Highlights Here) For Grand Street, the victory crowned an ambitious overhaul of the high school football team. In just four seasons, Mr. Eugene had managed to transform the once feckless program into an undefeated juggernaut.
That moment of triumph felt sadly distant on a recent fall afternoon as Grand Street squandered an early lead at home against Boys and Girls High School. Mr. Eugene fumed as he watched the Wolves commit one blunder after another: The quarterback was overthrowing his receivers, the safeties were lagging in coverage and the offensive line was getting steamrolled. All of his instructions seemed to go unheeded.
“Can anyone even hear me?” Mr. Eugene bellowed in exasperation.
In fact, no one could.
Early this season, Mr. Eugene, 34, was fired, after being charged with recruiting and enrollment violations. Banned from campus, he watches Grand Street home games through a chain-link fence, standing in a parking lot that borders the field. He uses walkie-talkies to communicate with the coaches, but so far it has been a fruitless exercise. Mr. Eugene is contesting his dismissal.
The Wolves have fallen into a state of turmoil, with their school locked in a series of disputes that involve race, ambition, funding and the politics of high school football.
The players feel they have become collateral damage, wondering if they can survive the loss of the man who made them champions. “Coach Eugene was our rock,” Chris Mattocks, the starting quarterback, said. “At this point we’re just lost.”
There was a time, before the disciplinary hearings and protracted legal clashes, when Mr. Eugene’s career seemed to follow the arc of a mawkish sports movie. Raised by a single mother in a New Orleans housing project, Mr. Eugene never played organized football as a child. Black kids in the neighborhood mostly stuck to basketball, and those who chose football rarely got the chance to play quarterback.
Read the Full Story here