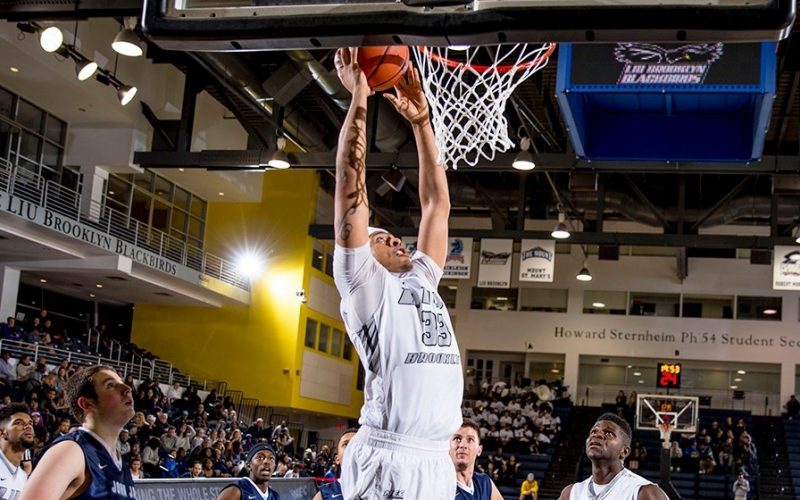 BROOKLYN, N.Y. – The LIU Brooklyn men’s basketball team opened the 2016-17 season in style Friday night, beating John Jay in the Steinberg Wellness Center, 78-40. Senior Jerome Frink led all players with 17 points and 16 rebounds for the double-double, along with three assists.

Nearly all of the LIU roster got to see the court Friday night, as 13 different players went into the game for the Blackbirds. John Jay held the lead only once, when they scored the first basket of the day, to go up, 2-0. Seniors Iverson Fleming and Jerome Frink were able to score two baskets in the next 10 seconds, putting LIU up, 4-2. From there, the Blackbirds never looked back, only widening the lead over the Bloodhounds. Late in the first half, a three-pointer from Julian Batts would put the Blackbirds up, 41-17, the score LIU would take into the break.

At the start of the second half, a three-pointer from Frink and a layup by junior Nura Zanna widened LIU’s lead to 48-17. LIU’s widest lead of the day came on two free throws from freshman Kwe Askew, who put the Blackbirds up 40 points, 71-31.

Senior Joel Hernandez also had a strong stat line for LIU, with 17 points, five rebounds, two blocks and two steals. Freshman Ashtyn Bradley had six points and six rebounds for the Blackbirds, while Askew led the defense with three blocks.