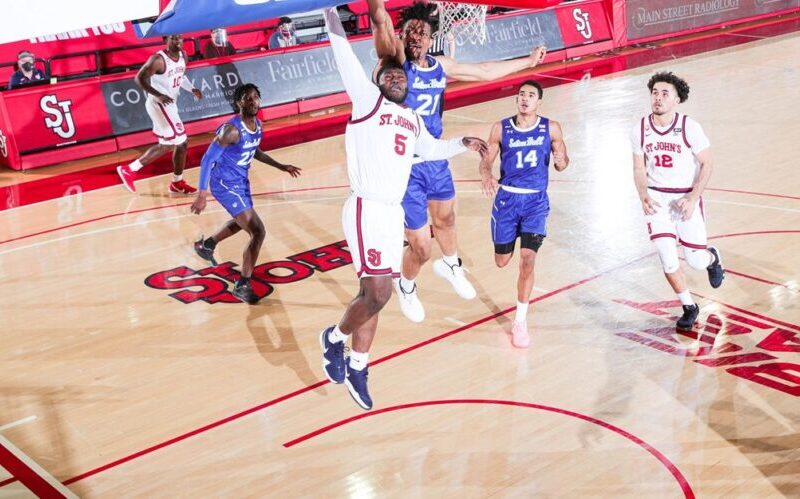 QUEENS, N.Y.  – The start was less than ideal.  The second half could not have gone better.

Trailing 18-0 with just over six minutes gone in the contest, the Red Storm outscored Seton Hall 81-53 the rest of the way, finishing the regular season with a 10-9 record in BIG EAST play and securing a top-five seed in next week’s conference tournament at Madison Square Garden.  By virtue of that top-five finish, the Johnnies have locked in a bye to the BIG EAST Quarterfinals for the first time since 2014-15.

The leading scorer in the BIG EAST, Julian Champagnie tallied 22 points on 7-of-15 shooting and grabbed six rebounds.  The Brooklyn native went a perfect 7-for-7 from the free-throw line and came away with two steals.  Champagnie, who averaged 19.5 points in 19 conference games, becomes the fourth player in program history and the first St. John’s underclassman to lead the BIG EAST in scoring over the course of a season, joining Chris Mullin (1983-84), Walter Berry (1985-86) and Marcus Hatten (2001-02).St. John’s struggled to find the bottom of the net at the start of the game while Seton Hall struggled to miss much of anything.  The Pirates made their first five, six of their first seven and seven of their first 10 shot attempts while St. John’s missed each of its first 10.  The Red Storm did not score its first point until 6:58 of game time had passed, as Seton Hall jumped out to an 18-0 lead.

From there, the Red Storm outscored Seton Hall, 21-9, over the next seven minutes, pulling within six on a Dunn 1-for-2 trip to the line with 6:17 to play in the opening half.  St. John’s would get no closer than six in the first stanza and trailed 38-28 at the intermission.

Coming out of the locker room, the two teams traded buckets in the opening minute of action, as a Shavar Reynolds jumper made it 40-30 in favor of the Pirates with 19:11 to go.  Over the next eight minutes, St. John’s outscored the Pirates by a margin of 26-6.  Capping that larger run was a 12-0 spurt that featured an Earlington three, four points from Champagnie, and five points from Addae-Wusu to put the Red Storm ahead by double digits for the first time, 56-46, with 11:28 to play.

Seton Hall would not go down without a fight, as the Pirates cut the lead in half less than two minutes later on a Mamukelashvili layup.  The Red Storm responded with a 9-2 run to take its largest lead of the night, 67-55, on a Cole fadeaway jumper with six minutes to play.

Seton Hall quickly cut the deficit back to six at the under-four media timeout, but the Johnnies managed to keep the Pirates at bay thanks to a pair of clutch 3-pointers from Earlington.

The lead shrank to five with 44 seconds left following back-to-back Seton Hall triples, but Champagnie and Williams combined to go 5-for-6 from the charity stripe as the Red Storm held on for a 10-point victory.

The Red Storm enters the BIG EAST Tournament as the No. 4 seed and will face No. 5 Seton Hall in the quarterfinals on Thursday at 3 p.m. on FS1.