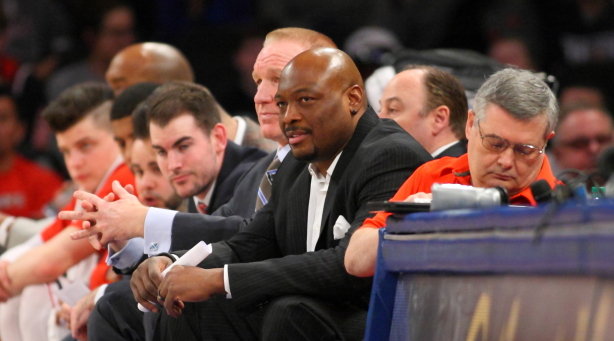 QUEENS, N.Y. – St. John’s announced Thursday that Naismith Memorial Basketball Hall of Famer Mitch Richmond has been elevated to assistant coach on the Red Storm men’s basketball staff. Richmond, a six-time NBA All-Star and five-time All-NBA selection, enters his second season with the program, previously serving as a special assistant for the 2015-16 campaign. The Red Storm also promoted former graduate assistant Luca Virgilio, who will serve as the assistant to the head coach. Additionally, Chris Huey has joined the St. John’s staff as a graduate assistant, after most recently working as the video coordinator for the Santa Clara men’s basketball team. Richmond was enshrined in the Naismith Memorial Basketball Hall of Fame in 2014 after playing 14 years in the NBA with the Golden State Warriors, Sacramento Kings, Washington Wizards and Los Angeles Lakers. A member of the Lakers 2002 NBA Championship team, Richmond finished his NBA career with 20,497 points and had his No. 2 jersey retired by the Kings on Dec. 5, 2003 after playing seven seasons with the organization. A two-time Olympian, Richmond won a gold medal with the United States Olympic Team (Dream Team III) at the 1996 Summer Games in Atlanta and a bronze medal in the 1988 Olympics in Seoul. Following his Hall of Fame playing career, Richmond spent six years working with the Golden State Warriors front office. He rejoined the organization in 2004 as a Special Assistant, serving in the role for three seasons before being promoted to the Director of Player Personnel from 2007-2009.  Prior to joining the St. John’s staff, Richmond worked for the Sacramento Kings organization from 2013-15 as Special Assistant to the General Manager. The Kansas State alumnus was selected with the fifth overall pick in the 1988 NBA Draft by the Warriors. Richmond was named the NBA’s Rookie of the Year and averaged 21.0 or more points in each of his first 10 professional seasons becoming one of just 10 players in NBA history to do so, joining the likes of Kareem Abdul-Jabbar, Michael Jordan, Shaquille O’Neal and Oscar Robertson. Richmond’s No. 23 was retired by Kansas State in 2009, honoring a remarkable two-year career under head coach Lon Kruger. The Wildcats’ back-to-back trips to the NCAA Tournament were fueled by Richmond’s program-record 1,327 points over a two-year career. He garnered consensus All-America honors after leading the Wildcats to the 1988 NCAA Tournament Midwest Regional Final. Virgilio enters his third season working with the Red Storm basketball program. Over the last two years as a graduate assistant, Virgilio held oversight responsibility of the team managers, provided administrative support and assisted in the coordination of on-campus recruiting activities. Hailing from Italy, Virgilio earned his master’s degree in sport management this past May.  In his new role, Virgilio will provide support for a variety of daily operations within the men’s basketball program. His responsibilities include, managing the team’s schedule, organizing travel, and supervising student development activities. Virgilio will continue to assist with on-campus visits of prospective student-athletes, maintaining NCAA compliance-related records and performing other duties as assigned by the head coach.  Huey comes to Queens after spending the 2015-16 campaign at Santa Clara working under head coach Kerry Keating. As the team’s video coordinator, Huey managed the technical operations of capturing and coding practices and games, while also directing the implementation of video analysis into training and scouting activities. He was also responsible for organizing all video exchange and tracking statistical trends as advised by the coaching staff. Prior to Santa Clara, Huey served as a men’s basketball student manager and video intern at the University of Kansas from 2012-15. The Kansas City native was part of three Big 12 regular-season championships and three NCAA Tournament appearances with the Jayhawks, including a run to the Sweet 16 in 2013. In his final year at Kansas, Huey practiced with the scout team and became the first manager in the Bill Self Era to suit up in a game on Feb. 21, 2015 against TCU at Allen Fieldhouse. Huey earned his bachelor’s degree in sports management with a minor in business.