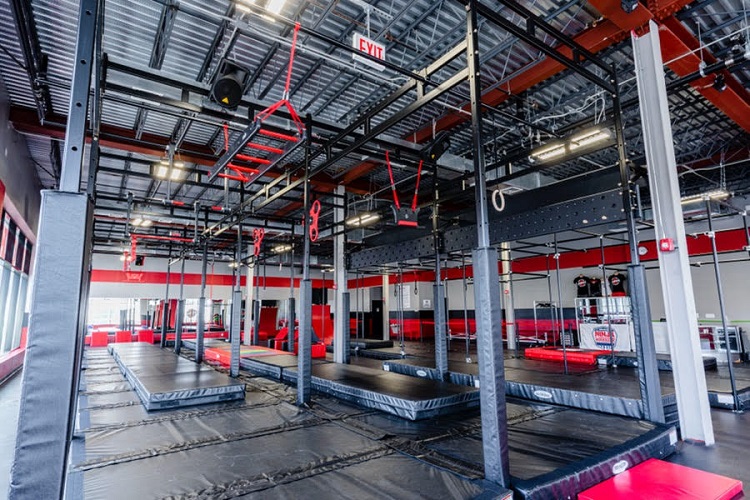 New York City Ninja Academy, the first-ever dedicated ninja warrior obstacle training facility in New York City, is set to open a second location at 340 Fourth Avenue, Brooklyn, NY on February 28. There will be a soft open this week with drop-in classes and private lessons available for students to try and if you go to Brooklyn Ninja Academy’s Instagram HERE you can win a free one-hour drop-in class.  The Brooklyn Ninja Academy is a state of the art 7,000 square foot facility located between Park Slope and Gowanus with exciting new obstacles not available at the Manhattan location.    See a sneak peek into the new facility below:

Both Academies teach participants how to overcome uniquely designed ninja warrior obstacles by analyzing, approaching, and conquering obstacles one by one, mimicking the movement and strategy of those on the popular NBC television show, American Ninja Warrior.  Students are taught by the best young peers and coaches in the industry including Darion Bennett who competed on the 2018 show and will compete in Season 14.  Fifteen-year-old Jordan Carr , a multi-year National Ninja League world champion who competed on American Ninja Warrior Jr seasons 2 and 3, and will compete on Season 14, is a former competitive speed rock climber for Team USA as well.  Also, eleven-year-old Titan Saresky, a part-time kids coach and a National Ninja League multi-year finalist and world champion, crowned World’s Strongest Ninja in 2021, and 2x Ultimate Ninja Athlete Association finalist, as well as Kevin Liang a fitness specialist coach and 3x American Ninja Warrior competitor.  Students can expect guest star ninja coaches including American Ninja Warrior veterans Flip Rodriguez, Najee Richardson, Barclay Stockett, and more to come at both locations.

The Academies offers after school and weekend kids’ programs for ages 6 to 13, training for adults of all skill levels, and advanced sessions to prepare athletes for competition.  Ninjas learn new skills and techniques for climbing, swinging, agility, balance, and strength. Those new skills are then applied to master various obstacles with increasing difficulty. Participants will eventually learn to conquer an entire obstacle course. Ninja warrior training is a thrilling physical and mental challenge for all skills levels and an innovative approach to setting, achieving, and surpassing personal goals.  Both Academies also host special events such as birthday parties, field trips, corporate and private events, and even bachelor parties. The strict COVID-19 prevention safety measures are in place in accordance with New York City.  Safety information is outlined on their websites.

After being awarded second-place among over 400 entrants in The New York Public Library’s 11th Annual New York StartUP! Business Plan Competition for New York-based startup entrepreneurs in 2020, franchise owner, Madelyn Scarpulla made the bold decision to open her business during the pandemic.  “I was in the process of developing the ninja academy prior to the pandemic,” said Scarpulla.  “When I was ready to open the doors, I decided to take a chance knowing that parents were desperate for a physical outlet for their kids, and adults also needed to get out of the house.”

Now, only a year later and following the success of the first location, Scarpulla is set on expanding. “The perfect spot found me – an ideal location in Brooklyn with appropriate space and high ceilings, which is a very rare find. Brooklyn Ninja is located near several schools, in a residential Brooklyn neighborhood. Not only will the Brooklyn location serve a new community of ninjas, but many of our current Brooklyn families will be spared the long commute to Manhattan’s west side.”

The hit NBC television show American Ninja Warrior debuted in 2009 and has been nominated for seven Emmy Awards. For 13 seasons, the action-packed series follows ninja warrior competitors as they tackle a series of challenging obstacles courses, with the goal of winning a million-dollar prize. Spin-off shows include American Ninja Warrior Junior, American Ninja Warrior Ninja vs Ninja, USA vs The World and Celebrity Ninja.  The growing popularity of the show among kids and adults alike has created a demand for ninja warrior obstacle training facilities, which are currently few and far between.

Scarpulla is a long-time music industry professional with a diverse background in marketing, creative services, and business development, who’s held senior positions at several major and independent record labels, and a major-market radio station. “I’ve spent my entire career applying my business savvy and creative energy to benefit others,” says Scarpulla. “And now I’m focused on my own endeavors. I’m thrilled to combine my business skills with my life-long passion for athletics to bring the sport of ninja warrior to the greatest city in the world.”

The Brooklyn location is easily accessible by subway, bus, car, and bike, with a dedicated bike lane on Fourth Avenue.