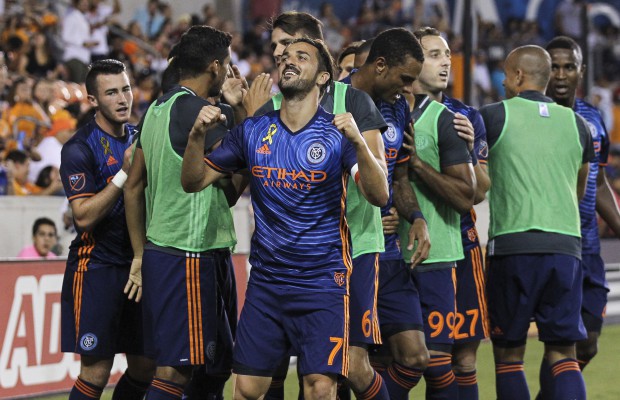 New York City FC could have been the third team in-a-row to lose a vital late-season match to the Houston Dynamo.

Instead, against the team that defeated Real Salt Lake and the Portland Timbers, City were in control, helping them end the weekend in a tie with the New York Red Bulls for first in the East.

“It is a tough place to come and try to play,” head coach Patrick Vieira said, “but I think tonight we did it really well. I’m really pleased with our team performance because I truly believe that we controlled the game. We managed the game really well.

“We played well when we had possession of the ball and out of possession I think we’ve been really aggressive, and we didn’t give them time on the ball. That was a really good team performance away from home.”

NYCFC were able to dictate the match with 57 percent of the possession.  They completed 83 percent of their passes and kept the Dynamo without a shot on target. Though The Pigeons needed set pieces and counterattacks to find their goals, they created more of the chances throughout the match. David Villa finished his chances for his second double in as many weeks to go atop the Golden Boot race with 21 goals.

“I think it was a difficult game [after] a long trip almost at the end of the season,” Villa said. “After having played many games and the team has given it all since the beginning. We are very pleased for the way we worked throughout the week and for the game we have done in offense and defense.”

Vieira fielded an attack-minded starting lineup with R.J. Allen at right back and Jack Harrison entering the lineup for Steven Mendoza who had an injured hamstring. Andoni Iraola often dropped in between the centerbacks to help the team keep possession and play from the back also allowing Allen and Ronald Matarrita to play inside.

As a result, City were able to remain compact with and without the ball limiting any openings for the Dynamo.

“We give players the structure and then they express themselves and they express their talent,” Vieira said. “David just played the way that the team played. It was really aggressive up front. We closed them down. We made it really difficult for them. And then when we create chances, they know how to score goals.

“And this is a really, really big David Villa tonight, but like the rest of the team because to come here and play the way we did, we needed a good squad and players to play at their best.”

Seeing the game out, Vieira inserted Federico Bravo in midfield then Tony Taylor out wide. Vieira said Taylor had earned an opportunity for more playing time in training earlier in the week. Friday night Taylor had his chance with ten minutes to go to play with intensity and link with Villa. Taylor attempted to lead counterattacks and take defenders on but made his contribution in stoppage time crossing to an open Villa for the second goal.

Taylor’s assist is the latest in a series of contributions from City’s bench in September. Khiry Shelton had two assists in the 3–2 win against D.C. United on the 1st and scored in the draw with FC Dallas on the 17th. Steven Mendoza earned the start against the Chicago Fire for his work replacing Frank Lampard in that Dallas match. But ultimately with Lampard sidelined, it is Villa who has picked up the load with four goals and an assist in the last two matches.

Read More on Empire of Soccer

Previous PostThe Bronx Becomes a Playoff-Clinching Party Spot, Just Not for the Yankees