Home Sports Baseball The Bronx Becomes a Playoff-Clinching Party Spot, Just Not for the Yankees
BaseballYankees

The Bronx Becomes a Playoff-Clinching Party Spot, Just Not for the Yankees 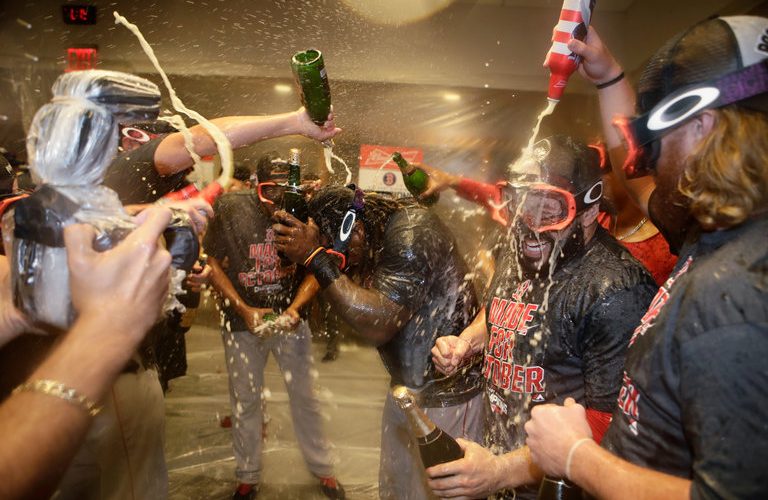 As soon as the Red Sox took a 3-0 lead in the top of the eighth inning Wednesday night, Lou Cucuzza Jr., the longtime manager of the visiting clubhouse at Yankee Stadium, put in the call to stadium operations. It was a go.

Within seconds, a crew of maintenance workers descended on the visiting clubhouse with rolls of plastic wrap, tape and staple guns, feverishly erecting a protective wrapper around the roughly 900-square-foot room.

But out on the field, the Yankees began a wild comeback in the bottom of the ninth inning, which Cucuzza watched carefully. If the Yankees won — as they did — and if the Baltimore Orioles lost to the Toronto Blue Jays, the Red Sox would not clinch the American League East title. Cucuzza and the maintenance crew would have had to tear down the work they had just completed in only a few minutes, before the losing players returned to the clubhouse.

“I had my phone, and I was also watching the score in Toronto,” Cucuzza said. “It was close, but when I saw the Orioles scored in the ninth, I just said to leave it all up.”

When the Orioles won on Wednesday, the Red Sox clinched the division and were able to celebrate. Now it could be the Orioles’ turn, leaving Cucuzza and his crew to arrange and clean up a second celebration.

The Orioles, who lost to the Yankees, 7-3, on Saturday, could clinch a wild-card berth on Sunday, which would result in Yankee Stadium having hosted two Champagne-and-beer celebrations in less than a week, neither involving the Yankees themselves. Times have certainly changed.

“If you win, you’ve earned that right,” Joe Girardi, the Yankees’ manager, said with a shrug. “If you don’t want them to celebrate, then don’t let them beat you.”

Clubhouse celebrations have been a tradition in baseball dating at least to the 1950s. But with the advent of divisional play, and then of three divisions and two wild-card teams in recent years, the Champagne-infused fiestas have mushroomed.

There are now five playoff teams in each league, so 10 teams can celebrate their entrance into the postseason. With each round of the playoffs (two wild-card games, two division series, two league championships and one World Series) factored in, baseball can have a total of 17 “Champagne fights,” as Japanese reporters like to call them.

Next PostNYCFC strong vs. Houston