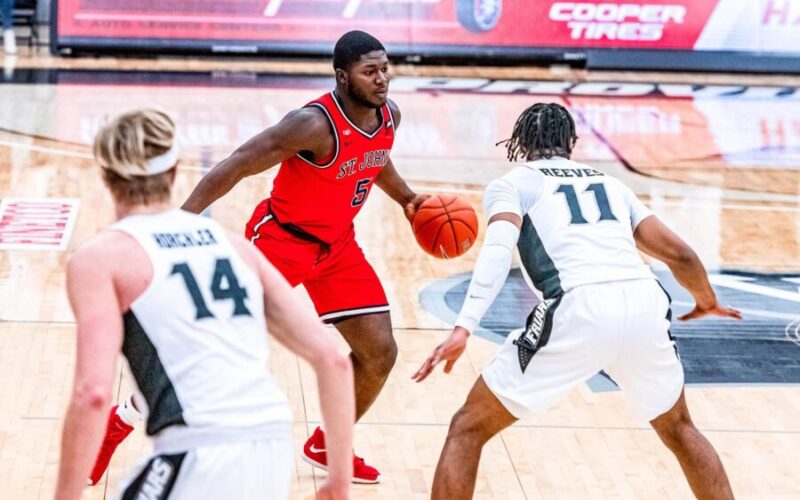 QUEENS, N.Y. – Following an eight-day break, the St. John’s men’s basketball team will be a two-game homestand to close the regular season on Wednesday when it plays host to Providence.

Tip-off is set for 7 p.m. on CBS Sports Network and 570 AM WMCA. Andrew Catalon and Steve Lappas will handle the television broadcasting duties while John Minko and Vin Parise will narrate the action over the airwaves live from Queens. The Learfield-IMG College Red Storm Sports Network radio broadcast will also be available through TuneIn Radio, as well as SiriusXM channel 387 and streamed through channel 977.

St. John’s (14-10, 8-9 BIG EAST) enters its final two games of the regular season having dropped back-to-back contests against DePaul and Villanova. Despite having fallen to the Blue Demons in their most recent outing at Carnesecca Arena, the Johnnies have been successful in Queens this season, compiling a record of 9-3 in 12 home games including a win over then-No. 3/3 Villanova on Feb. 3.

Having dropped two in a row, the Red Storm will need to win out and get some help from the rest of the league to secure a top-five seed and a bye to the quarterfinals of the BIG EAST Tournament. Xavier (13-5, 6-5 BIG EAST), who plays Tuesday at Georgetown and Saturday at Marquette, would have to drop each of its last two games to fall out of the top five. Seton Hall (13-10, 10-7 BIG EAST), against whom St. John’s closes out the regular season on Saturday, would also have to lose each of its last two beginning against UConn on Wednesday. As it’s currently scheduled Xavier will have played 13 BIG EAST games at the close of the regular season, the lowest total of any team in the league.

As of Tuesday afternoon, it remains unclear whether or not St. John’s star freshman Posh Alexander will be able to suit up against the Friars. Alexander, a four-time BIG EAST Freshman of the Week this season, injured his right hand late in the game against Villanova on Feb. 23. Alexander ranks second on the team in scoring (11.1 ppg) while leading the team in assists (4.4 apg) and steals (2.6 spg). Over their last 15 games, the Johnnies are 9-0 when Alexander scores in double figures and 0-6 when he does not. In the team’s last outing against Providence, a 92-81 victory on Feb. 6, Alexander poured in a season-high 21 points on 8-of-14 shooting, including a 3-of-5 effort from beyond the arc.

In that last outing against Providence, sophomore Julian Champagnie tallied his sixth double-double of the season, scoring 24 points on 9-of-18 shooting and grabbing 10 boards. Champagnie, the leading scorer in the BIG EAST at 20.0 points per game, has reached double figures in all 22 of his appearances this year with 10 efforts or 20-plus points. Champagnie went the entire month of February without missing a free throw, as the Brooklyn native has made 34 straight chances from the line dating back to the Red Storm’s Jan. 31 win at Marquette.

The Red Storm will try to get back to its defensive roots when it takes the floor on Wednesday. During a 10-game stretch between Jan. 12 and Feb. 16 that saw the team go 8-2, St. John’s allowed just 71.9 points per game and held teams to a 43.4 percent shooting, including a 29.3 percent success rate from deep. Over the last two games, the Johnnies have surrendered 84.5 points on average while allowing the opposition to shoot 55.3 percent from the floor and 44.1 percent from beyond the arc.

Providence comes to Queens with a record of 12-11, including an 8-9 mark in BIG EAST play. The Friars have won three of their last four games since falling to St. John’s on Feb. 6 with double-digits wins over Connecticut and Xavier during that stretch.

The Friars are led offensively by David Duke, who paces the team and ranks third in the BIG EAST at 17.2 points per game. Senior center Nate Watson, who scored a game-high 30 points last time out against St. John’s, averages 16.6 points and team-high 6.7 boards per game. A third upperclassman, A.J. Reeves, averages 10.1 points per outing.

St. John’s and Providence will meet for the 118th time in the history of the two programs on Wednesday with the Johnnies holding a 63-54 edge in the series. The Red Storm has won two in a row against and will look to take its first three-game winning streak in the series since 2000.