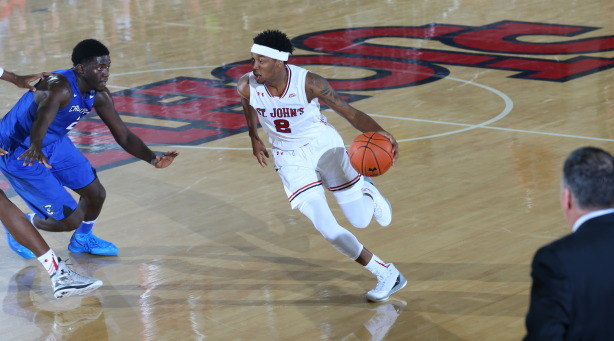 QUEENS, N.Y. – Despite cutting a 24-point second half deficit to single digits, St. John’s saw its three-game winning streak come to a close on Wednesday against No. 10/10 Creighton, 85-72, in front of 4,928 fans at Carnesecca Arena.

Marcus LoVett led the Red Storm (8-8, 2-1 BIG EAST) with his second-consecutive 20-point performance, scoring 23 points thanks in part to a 4-of-5 effort from beyond the arc. The Fort Wayne, Ind., native has now eclipsed the 20-point plateau on five occasions this season.

Two other Johnnies finished in double figures, as Shamorie Ponds poured in 17 points and grabbed five boards, while Tariq Owens added 12 points on 6-of-8 shooting from the floor to go along with five rebounds.

Malik Ellison chipped in seven points while dishing out seven assists and surrendering one turnover, pushing his assist-to-turnover to 15:1 over the last two contests.

The Johnnies could not seem to get shots to fall on Wednesday night, shooting 39.4 percent from their floor, five points below their season average. Creighton, on the other hand, made 52.3 percent of its tries from the floor.

It is often said that basketball is a game of runs and the first half of Wednesday’s game certainly lived up to that mantra.

Creighton scored the first seven points of the contest before the Johnnies made four of their next five shots to cut the deficit to a pair, 11-9, with just over seven minutes gone in the game.

Up 13-11 a few possessions later, Creighton rattled off seven unanswered over the next three minutes, jumping out to a 24-11 lead with just over eight minutes remaining in the opening stanza.

After LoVett responded with five unanswered to trim the lead, Creighton answered with seven-straight, which was promptly followed by an 8-2 Red Storm run to make it a nine-point game, 33-24, with 2:52 left in the period.

Creighton then closed the half on an 11-2 tear, taking a 44-26 advantage into the locker room.

Already with a 16-point advantage, Creighton scored the second half’s first six points and built its lead to 24, 50-26, in the early going.

St. John’s responded with an 8-0 run of their own and slowly began to whittle away at the deficit over the next several minutes, eventually cutting the Bluejay advantage to eight, 63-55, following a LoVett layup with 6:17 to play.

After Watson nailed a three on the following possession to put Creighton back up 11, St. John’s would cut it back to 10 on three occasions, but that’s as close as the Red Storm would get, as the Bluejays escaped Carnesecca Arena with a 13-point victory.