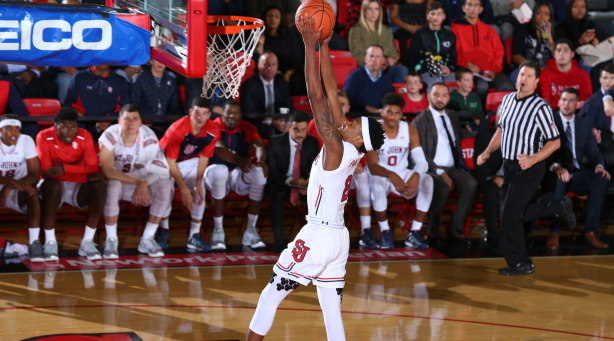 QUEENS, N.Y. – Led by the dynamic freshman backcourt duo of Shamorie Ponds and Marcus LoVett, St. John’s pulled away from Binghamton in the second half on Monday night’s game at Carnesecca Arena, as the Red Storm claimed a 77-61 victory to remain undefeated on the young season.

Ponds registered his first career double-double for the Red Storm (2-0), pouring in 21 points on 7-of-11 shooting, including a 4-for-6 showing from beyond the arc, and pulling down 10 rebounds. The freshman from Brooklyn also distributed four assists and recorded three steals.

LoVett tallied a game-high 23 points against Binghamton (1-1), making nine of his 16 tries from the floor and five of his 11 shots from three-point land. The rookie from Fort Wayne, Ind., also dished out four assists, grabbed four rebounds and registered a steal in 34 minutes of action.

“Marcus has great speed and Shamorie has great instincts and is deceptively quick,” commented Head Coach Chris Mullin on the pair. “When they beat their man they know whether to go finish at the basket or where the next guy is going to be. They have good spacing and understand their teammates. They move the ball very well. If a team moves the ball and shares the ball, the team is going to be fine.”

As a team, the Red Storm made 11 of its 26 attempts from downtown. Combined with their 11-of-22 showing from deep in the season-opener against Bethune-Cookman, the Johnnies have sank 11 or more three-pointers in back-to-back games for the first time since the 2009-10 season, when the Red Storm made 11 against Cornell on Dec. 21 before draining 13 against Bryant on Dec. 23.

Following a 25-8 overall run by the Red Storm, Binghamton battled back to cut the deficit over the final six minutes of the half, closing the period on a 14-7 run to enter the locker room down by seven, 39-32.

After seeing his team’s lead cut to just four on a pair of occasions early in the latter stanza, Sima sparked a run for the Red Storm with 16 minutes to play, as the Johnnies rattled off 15 unanswered to move ahead by 19, 58-39, just 3:52 later. Sima finished the run with six points, while LoVett chipped in a pair of triples and Malik Ellison added a three-pointer of his own.

The Red Storm moved ahead by as many as 25 in the second half before Binghamton closed the contest on an 8-0 to narrow the St. John’s advantage to 16, 77-61, at the final buzzer.

Next PostKnicks Dilemma: Noah or Porzingis?