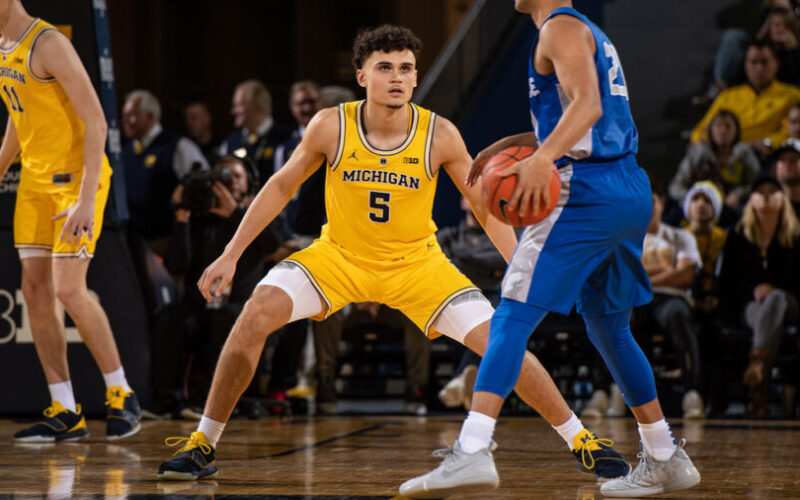 Who is Adrien Nunez …
• Known for his long range shooting
• Did not start playing basketball until the seventh grade – was previously an avid skateboarder and snowboarder
• Avid food connoisseur; father owns chain of food markets in Brooklyn area
• Avid user of social media, including TikTok

Sophomore (2019-20)
• Played in 22 games, with four starts
• Started first four games, filling in for Franz Wagner (wrist)
• Made first start against Appalachian State (Nov. 5), five points in 13 minutes
• Had season cut short after postseason was cancelled due to coronavirus pandemic
• Scored in 11 games, averaging 2.0 points per game
• Scored a career-high eight points against Houston Baptist (Nov. 22)
• Nearly 83 percent of his offensive shots were from long range (43 of 52)
• Knocked down 11 3-pointers, including a career-high two, 2x — Houston Baptist and UMass-Lowell (Dec. 29)
• Averaged 7.5 minutes, with six games of 10+ minutes
• Played a career-high 21 against Houston Baptist

Freshman (2018-19)
• Played in 20 games; all off the bench
• Made his debut against Norfolk State (Nov. 6); one rebound in three minutes
• Scored his first career points on 3-pointer at Indiana (Jan. 25), his only points of season
• Averaged 2.0 minutes, playing a season-high six vs. George Washington

Personal
• Born on May 14, 1999 in Manhattan, New York
• Son of Jenny Lessard and Martin Nunez
• Enrolled in the College of Literature, Science and the Arts
• Undecided major