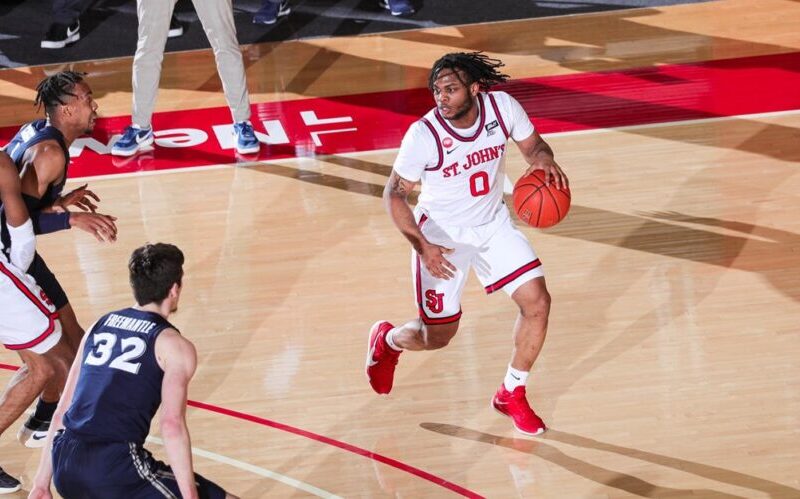 QUEENS, N.Y.  – After seeing its six-game winning streak snapped last week at Butler, the St. John’s men’s basketball team rebounded by snapping a streak of its own on Tuesday night at Carnesecca Arena, beating Xavier for the first time since 2015 and moving back above .500 in BIG EAST play with a 93-84 victory.

The win, which moved the Red Storm (14-8, 8-7 BIG EAST) into sole possession of fifth place in the BIG EAST standings, also marked the 400th of Mike Anderson‘s head coaching career.  Anderson began his head coaching career at UAB in 2002 after serving 17 years as an assistant coach at Tulsa and Arkansas, helping his mentor Nolan Richardson to 390 wins during that stretch.  Anderson has also served as the head coach at Missouri and Arkansas, leading his teams to 12 postseason berths and nine NCAA Tournaments.

The Red Storm, which cracked the 90-point mark for the fourth time in BIG EAST play, had five players finish in double figures for the fifth time this season.

The leading scorer in the BIG EAST, Julian Champagnie netted 21 points on 6-of-11 shooting from the floor and a perfect 7-for-7 effort from the charity stripe.  The sophomore from Brooklyn also added five rebounds.

Posh Alexander nearly became the first St. John’s player since Ron Artest in 1999 to tally a triple-double, finishing with 15 points, nine assists and eight rebounds, the latter two of which were season highs.  The four-time BIG EAST Freshman of the Week also recorded three steals and did not surrender a single turnover in 33 minutes of action.  13 of Alexander’s 15 points came after the intermission, as he went 6-of-8 from the floor in the second half.

After scoring a season-high 17 points in the team’s last game against Xavier, Rasheem Dunn registered 17 once again against the Musketeers on Tuesday.  The fifth-year senior, who went 7-for-11 form the charity stripe, also dished out four assists and grabbed three boards.

Marcellus Earlington logged what was arguably the most efficient outing of his collegiate career, posting 16 points on 6-of-9 shooting, including a 4-for-5 showing from deep, and grabbing nine boards.  The junior from Stony Point, N.Y., also dished out two assists and finished as a +14 in 20 minutes of action.

In addition to throwing down four of the rim-rocking dunks for which he has become well known, Isaih Moore also drained his lone three-point attempt to finish with 11 points.  The junior from Columbia, S.C., grabbed five boards in the win.

Still in the process of working his way back from injury, Greg Williams Jr. tallied eight points, three assists and no turnovers in 21 minutes while posting a game-high plus-minus rating of +16.

Before Tuesday, St. John’s had lost 12 straight decisions to Xavier, the second longest losing streak against a single opponent in program history behind only a 13-loss streak to Villanova from 2012-2018.  In that last win against Xavier prior to Tuesday, D’Angelo Harrison scored 20 while Sir’Dominic Pointer added 19 points and nine boards in a 58-57 victory at Madison Square Garden on Feb. 23, 2015.

Leading 9-4 after an Alexander steal-and-score three minutes into the contest, St. John’s went without a point for four minutes as Xavier used 10-0 run to take a 14-9 edge.  That lead would be the largest of the game for the Musketeers, as the Johnnies uncorked a 7-0 run to move back ahead, 16-14.

Colby Jones responded with a triple at the 10:04 mark of the first half to put Xavier in front, 17-16, but Williams answered with a layup and the Red Storm never trailed the rest of the way.

St. John’s moved ahead by as many as nine, 32-23, following seven straight made field goals, but the Musketeers made four consecutive triples to pull back within one, 36-35, with 3:44 remaining in the half.  The Red Storm responded by scoring 10 of the game’s next 11 points, pushing its lead to double figures before taking a 46-38 lead into the locker room.

After St. John’s took its largest lead of the game, 65-52, following an Earlington triple with seven and a half minutes gone in the period, Nate Johnson went on a personal 7-0 run to pull Xavier within six, 65-59, with just under 11 minutes to go.  Moore responded by throwing down back-to-back highlight reel dunks, pushing the lead back to double figures and shifting momentum in favor of the Red Storm.

Xavier would not make it a two-possession game again until the final 30 seconds, as the Red Storm cruised to its eighth win in its last 10 games.

St. John’s will return to action on Saturday, welcoming DePaul to Carnesecca Arena for a 7:30 p.m. tip on FS1.

Next PostFordham Athletics on Two-Week Pause