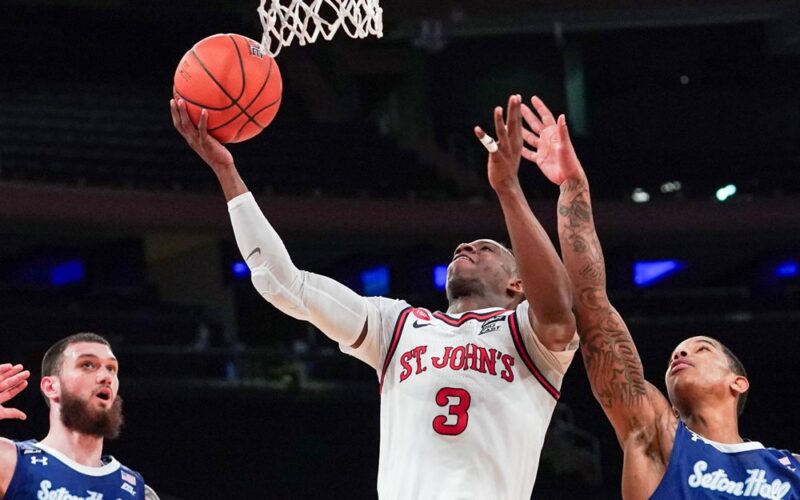 EW YORK (March 11, 2021) – The St. John’s men’s basketball fell to Seton Hall in overtime, 77-69, in the quarterfinal round of the BIG EAST Tournament on Thursday afternoon.

BIG EAST Freshman of the Year and Co-Defensive Player of the Year Posh Alexander returned after missing two games with a hand injury.  The Brooklyn native scored six points and recorded three steals.

Sandro Mamukelashvili and Jared Rhoden logged double-doubles to lead the Pirates (14-12).  Mamukelashvili, one of three league-wide to share BIG EAST Player of the Year honors, had 20 points, 11 rebounds and four assists.  Rhoden finished with 19 points and 16 rebounds.

From there, the Pirates went more than five minutes without a point, as the Red Storm ripped off a 10-0 run to reclaim the lead, 32-31, on a transition bucket from Dunn with 49 ticks left in the period.

Ike Obiagu, who finished with seven blocks, broke the scoreless streak for Seton Hall with 19 seconds to go, giving the Pirates a one-point lead, 33-32, at the intermission.

With his team facing its largest deficit of the second stanza, Williams scored seven points on a 9-0 St. John’s run, putting the Red Storm ahead by a pair, 52-50, two minutes later.

Rhoden responded with a layup to tie the score at 52, the first of four ties down the stretch.

Trailing 60-57 with two minutes to go, Earlington drained a corner three to tie the game before a 1-for-2 trip to the line from Dunn put the Johnnies ahead 62-60 with just over a minute to play.

Myles Cale tied it for Seton Hall on the ensuing possession and the Pirates had a shot to win it in the closing seconds of regulation. The Red Storm promptly made not one, but two, stops on Mamukelashvili and sent the game into overtime.

Seton Hall took the lead on the first possession of overtime and never trailed again. Ahead by one, 65-64, with 3:30 to go, Seton Hall scored the game’s next five points to move ahead by six almost two minutes later.