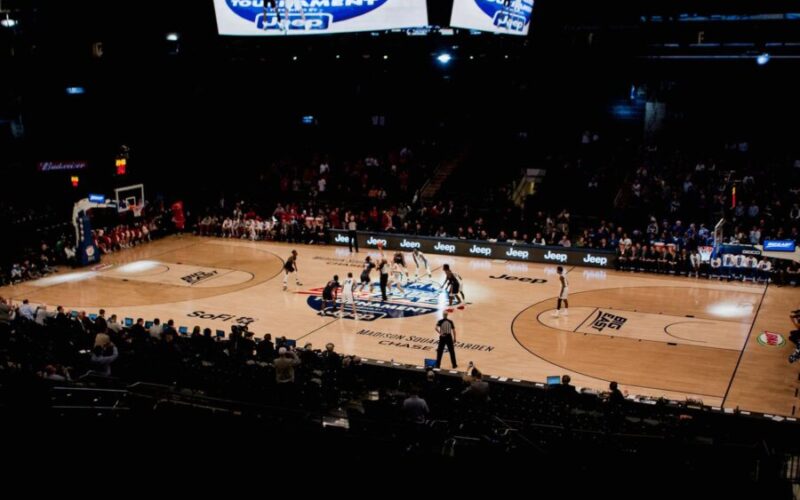 QUEENS, N.Y. – After finishing with a winning record in conference play for the first time in more than half a decade, the St. John’s men’s basketball team will begin BIG EAST Tournament action on Thursday when it faces off against Seton Hall at 3 p.m. inside Madison Square Garden.

The quarterfinal matchup between the fourth-seeded Red Storm (16-10, 10-9 BIG EAST) and fifth-seeded Pirates (13-12, 10-9 BIG EAST) will be broadcast live on FS1 and 570 AM WMCA.  Tim Brando and Jim Jackson will call the game for FS1 while John Minko and Brandon Tierney will narrate the action over the airwaves. The Learfield-IMG College Red Storm Sports Network radio broadcast will also be available through TuneIn Radio, as well as SiriusXM channel 207 and streamed through channel 967.

The no. 4 seed for the Red Storm is the program’s highest in more than two decades, as the Johnnies had secured no better than a full-field no. 5 seed since winning it all as the no. 3 seed in 2000.  The Red Storm’s 10-9 record in BIG EAST play was its first winning conference mark since going 10-8 during the 2014-15 campaign, a year in which the Johnnies earned a no. 9 seed in the NCAA Tournament.  The Red Storm also won 10 league contests during the first season of the realigned conference in 2013-14.

The Johnnies closed out the regular season strong, wrapping up with back-to-back home wins against Providence and Seton Hall.  The Red Storm erased double-digit halftime deficits in both of those victories.  In total, the Red Storm outscored its opponents by a 104-58 margin in the second halves of those final two games.

Julian Champagnie was named the final BIG EAST Player of the Week for his efforts against Providence and Seton Hall, averaging 19.0 points and 8.0 rebounds over his last two regular season contests.  The sophomore tallied his league-leading seventh double-double of the campaign against the Friars, scoring 16 points and grabbing 10 boards.  Three days later against the Pirates, Champagnie netted 22 points and pulled down six rebounds.  The effort marked his 11th of the season with 20 or more points and his 24th double-digit scoring performance in 24 tries. Champagnie was named to the All-BIG EAST First Team on Sunday before garnering BIG EAST Co-Most Improved Player honors on Monday alongside Xavier’s Zach Freemantle.  He became the 17th player in program history and just the fifth sophomore to find a spot on the conference’s top team, joining Chris Mullin (1983), Ron Artest (1999), Erick Barkley (2000) and Shamorie Ponds (2018) in that regard.

Fellow Brooklyn native Posh Alexander was also honored by the BIG EAST following the conclusion of the regular season, earning unanimous selection to the BIG EAST All-Freshman Team on Sunday before sharing BIG EAST Co-Defensive Player of the Year accolades with UConn’s Isaiah Whaley on Monday.  The BIG EAST leader in steals this season with 2.6 per outing, Alexander became just the fourth freshmen in conference history to garner the league’s top individual defensive honor.  The other three to do so are all enshrined in the Naismith Memorial Basketball Hall of Fame: Allen Iverson (1995), Alonzo Mourning (1989) and Patrick Ewing (1982).

Seton Hall comes to The Garden on the heels of a four-game skid to end the regular season.  Three of those four losses came on the road.

The Pirates are led offensively by unanimous First Team All-BIG EAST selection Sandro Mamukelashvili, who ranks second in the conference with 17.8 points per game this season.  He had a 15-point, 10-rebound double-double in the season finale at St. John’s, but scored just six of those points after the intermission, shooting 3-for-7 from the field in the latter stanza.

Jared Rhoden and Myles Cale also average double figures for the Pirates, pouring in 14.4 and 11.8 points per game, respectively.  Shavar Reynolds, the team leader in assists with 4.3 per game, also chips in 7.8 points and shoots a team-best 38.2 percent from three-point range.

The winner of Thursday’s game between Seton Hall and St. John’s will face the winner of the quarterfinal between regular season champion Villanova and the winner of Wednesday’s no. 8/no. 9 game between Georgetown and Marquette. All BIG EAST Tournament games through the semifinals will air on FS1. The title game will air on Saturday at 6:30 p.m. on FOX.

Next PostManhattan To Face Fairfield In MAAC Championship Opener