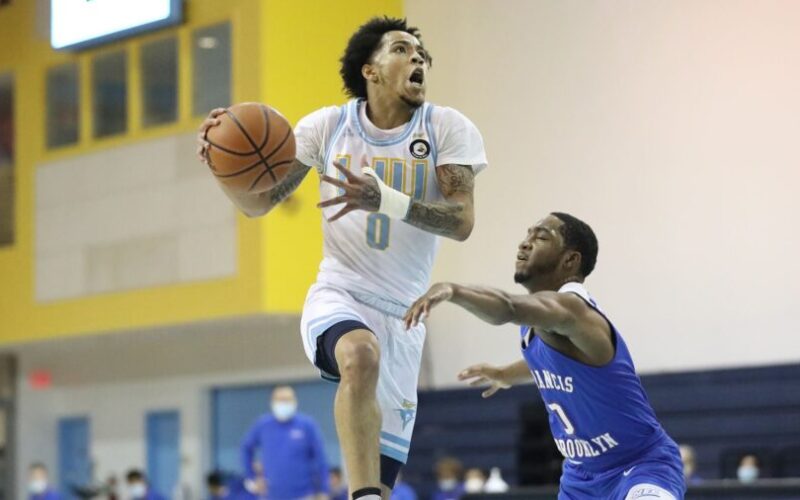 The Sharks jumped out to a 7-0 run early in the game, but the Terriers hung tough, coming back from behind and taking the lead twice. But midway through the first half, LIU found its rhythm, and the Sharks put together a 16-3 lead, led by junior Virshon Cotton. Over five minutes, Cottom would score nine of LIU’s 16 points, helping the home team jump out to a 34-22 lead. LIU’s sharpshooting would continue, as the Sharks led, 53-34 at the half time break. LIU shot 60 percent from the field in the first half.

But the Terriers came out strong in the second half, opening the stanza on a 16-5 run, and cutting the lead to 58-50. Coach Derek Kellogg called a timeout, and thanks to a three from sophomore Alex Rivera, LIU stymied SFBK’s momentum. LIU would string together another 12-4 run over two minutes that gave the home team the 82-60 advantage with 7:27 to play. In the end, LIU took the win, 96-84.

SHARK BITES
Junior Virshon Cotton led the Sharks, scoring 23 points in the victory. He was one of three players with 20+ points in the win for LIU.
Junior Eral Penn had 22 points (on 9-of-12 shooting), with 11 rebounds, four assists, and three blocks.
Senior Ty Flowers had 20 points, six assists, four rebounds, and two steals for LIU.
Sophomore Alex Rivera added 11 points, while sophomore Tre Wood had a team-high seven assists, along with six rebounds.
Up next, the Sharks head south, preparing to take on Mount St. Mary’s on the road, Thursday, February 11, and Friday, February 12.

Next PostManhattan Falls In Overtime Heartbreaker